The worldwide increase in the prevalence of multi-antibiotic–resistant bacteria has threatened the physician’s ability to provide appropriate therapy for infections. The relationship between antimicrobial drug concentration and infecting pathogen population reduction is of primary interest. Using data derived from mice infected with the bacterium Pseudomonas aeruginosa and treated with a fluoroquinolone antibiotic, a mathematical model was developed that described relationships between antimicrobial drug exposures and changes in drug-susceptible and -resistant bacterial subpopulations at an infection site. Dosing regimens and consequent drug exposures that amplify or suppress the emergence of resistant bacterial subpopulations were identified and prospectively validated. Resistant clones selected in vivo by suboptimal regimens were characterized. No mutations were identified in the quinolone resistance–determining regions of gyrA/B or parC/E. However, all resistant clones demonstrated efflux pump overexpression. At base line, MexAB-OprM, MexCD-OprJ, and MexEF-OprN were represented in the drug-resistant population. After 28 hours of therapy, MexCD-OprJ became the predominant pump expressed in the resistant clones. The likelihood of achieving resistance-suppression exposure in humans with a clinically prescribed antibiotic dose was determined. The methods developed in this study provide insight regarding how mathematical models can be used to identify rational dosing regimens that suppress the amplification of the resistant mutant population. 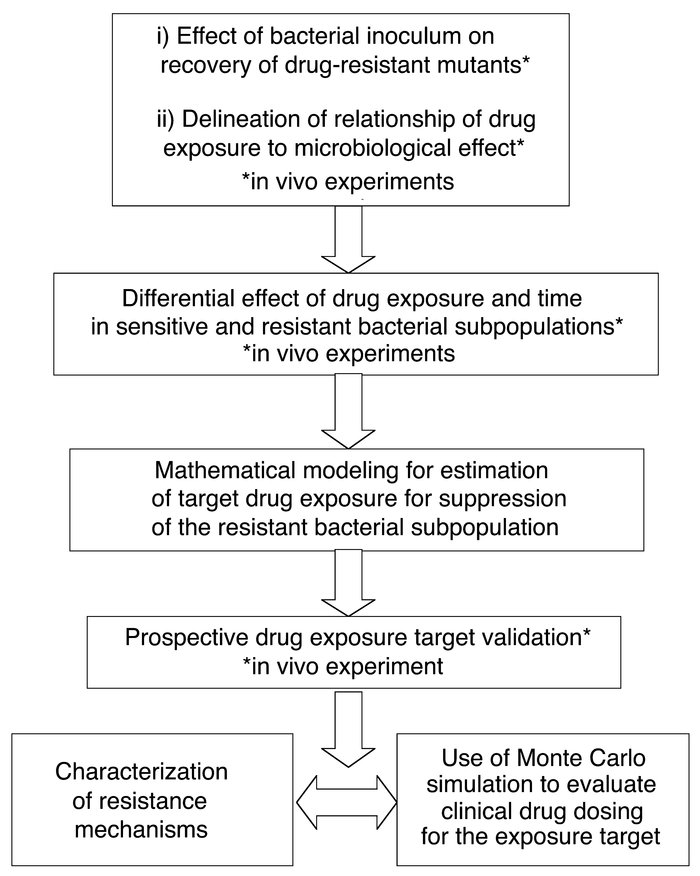 Flow diagram of the experimental design.