IFN-α activates the signal transducer and activator of transcription (STAT) family of proteins; however, it is unknown whether IFN-α exerts its antitumor actions primarily through a direct effect on malignant cells or by stimulating the immune system. To investigate the contribution of STAT1 signaling within the tumor, we generated a STAT1-deficient melanoma cell line, AGS-1. We reconstituted STAT1 into AGS-1 cells by retroviral gene transfer. The resulting cell line (AGS-1STAT1) showed normal regulation of IFN-α–stimulated genes (e.g., H2k, ISG-54) as compared with AGS-1 cells infected with the empty vector (AGS-1MSCV). However, mice challenged with the AGS-1, AGS-1STAT1, and AGS-1MSCV cell lines exhibited nearly identical survival in response to IFN-α treatment, indicating that restored STAT1 signaling within the tumor did not augment the antitumor activity of IFN-α. In contrast, STAT1–/– mice could not utilize exogenous IFN-α to inhibit the growth of STAT1+/+ melanoma cells in either an intraperitoneal tumor model or in the adjuvant setting. The survival of tumor-bearing STAT1–/– mice was identical regardless of treatment (IFN-α or PBS). Additional cell depletion studies demonstrated that NK cells mediated the antitumor effects of IFN-α. Thus, STAT1-mediated gene regulation within immune effectors was necessary for mediating the antitumor effects of IFN-α in this experimental system. 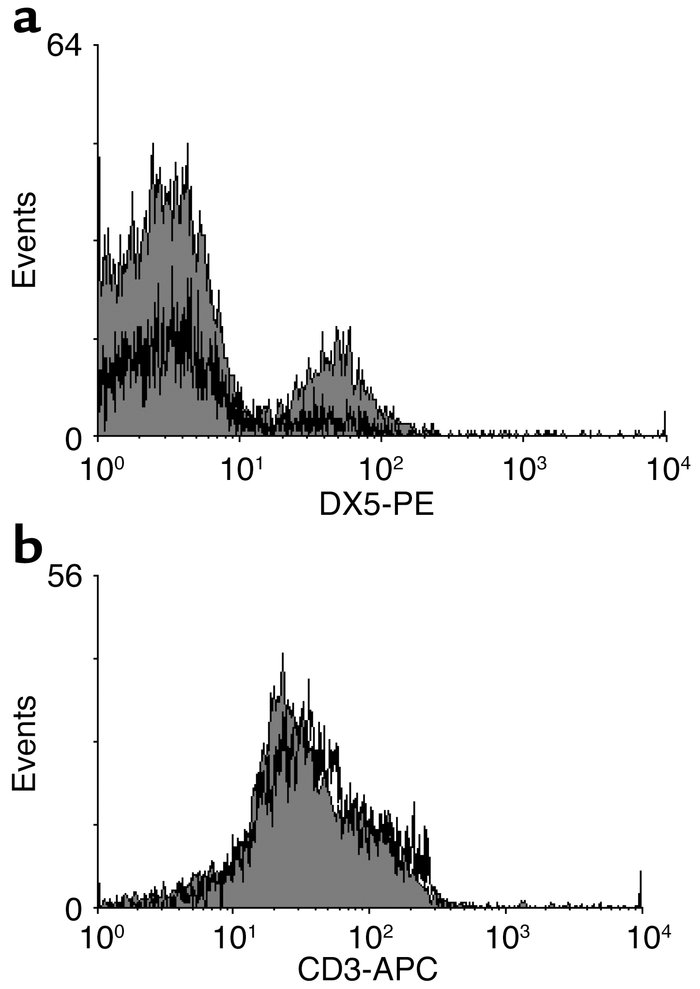 IFN-α treatment leads to increased NK cells within the PECs of mice bearing B16F1 melanoma tumors. () Flow cytometric analysis of PECs from C57BL/6 mice bearing B16F1 tumors revealed the presence of a significant NK cell infiltrate in IFN-α–treated mice (shaded histogram) but not in PBS-treated mice (white histogram). () In contrast, CD3-positive cells were present in PECs from both PBS-treated and IFN-α–treated mice. Each analysis was performed on at least 10,000 cells gated in the region of the lymphocyte population on the basis of light scatter properties (forward scatter versus side scatter). Fluorescence data were shown on four-decade log scales, and instrument settings were adjusted in reference to PECs stained with appropriate isotype control antibodies. Each histogram is representative of PECs from five mice.