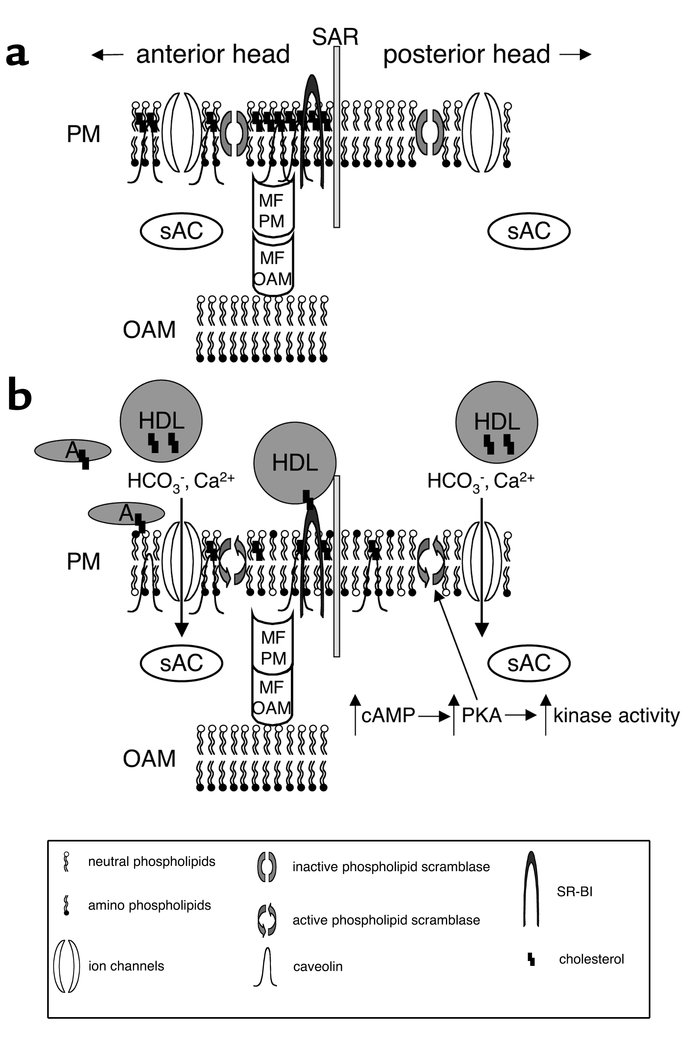 Model for the organization of cholesterol in the membranes of the sperm head, and its role in signaling. Schematic diagrams of a murine sperm incubated under noncapacitating conditions () and capacitating conditions (). In this model, membrane rafts (regions enriched in sterols) are organized in the plasma membrane of the anterior head. Membrane fusion proteins are inactive due to being tethered by caveolin. The distribution of phospholipids in the membrane leaflets is asymmetrical, as the scramblases are inactive. When exposed to capacitating conditions (bicarbonate, calcium, albumin, and HDLs), cholesterol is removed via a specific pathway (HDL–SR-BI) and a nonspecific pathway (albumin). Increases in sAC activity elevate cAMP levels and PKA activity and stimulate downstream kinases. This signaling results in increased phospholipid scrambling, causing a disordered distribution of amino- and neutral phospholipids. Together with the increase in membrane fluidity caused by the sterol efflux, this change results in lateral movement of some sterols and caveolin from the anterior to the posterior head. The loss of sterols from the membrane causes a disruption of the interaction between caveolin and the membrane fusion proteins, resulting in their activation. The plasma membrane (PM) and outer acrosomal membrane (OAM) are shown immediately adjacent to the subacrosomal ring (SAR). For simplicity, both an anion and a cation are drawn as passing through a single ion channel in . Cholesterol can exist in a free state in the membrane or be associated with cholesterol acceptors such as HDLs or albumin (A). sAC, a novel HCO3–-activated adenylyl cyclase that associates at least in part with membranes, is shown here in the sperm cytoplasm. Membrane fusion proteins (MF) can associate with either the PM or the OAM.