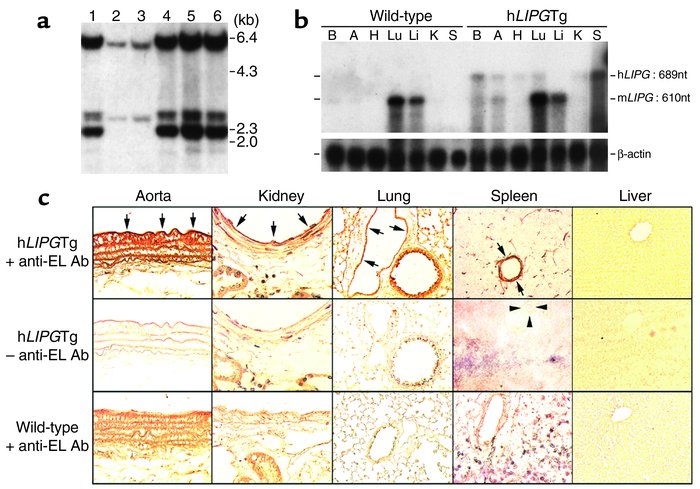 Generation of human endothelial lipase transgenic mice. () Genotyping of transgenic mice. Southern blot analysis was employed to detect the human transgene. Lanes 2 and 3 show wild-type mice; lanes 1, 4, and 6, heterozygous transgenic mice; and lane 5, homozygous transgenic mice. () RNase protection with hTg mouse RNAs. Human -specific signals were detected in the brain, aorta, heart, lung, kidney, and spleen. B, brain; A, aorta; H, heart; Lu, lung; Li, liver; K, kidney; S, spleen. () Immunohistochemical evaluation of human EL expression in transgenic mice. Tissues harvested from hTg mice were studied with an anti-human EL monoclonal antibody raised against a synthetic peptide. Human EL was primarily associated with the endothelium of the aorta and large vessels in the kidney, lung, and spleen as well as the microcirculation in the spleen and lung (arrows). Arrowheads in the spleen indicate the central artery, which does not stain when the primary antibody is omitted. No expression was detected in the liver. Original magnification: aorta, ×400; lung and liver, ×200; kidney and spleen, ×630.