The TSH receptor reveals itself

The TSH receptor reveals itself 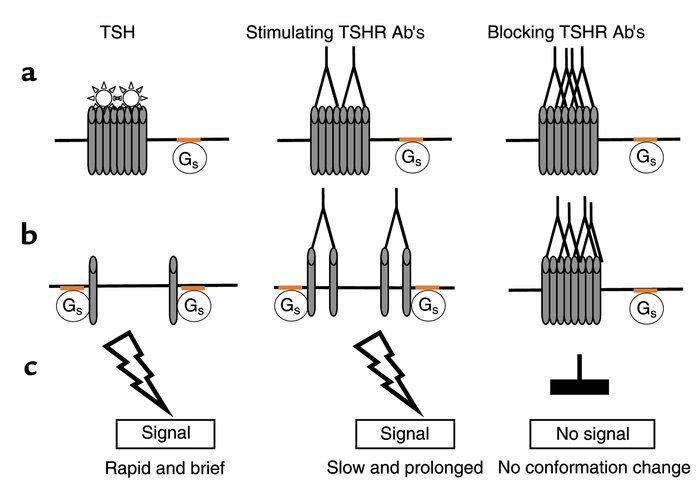 A model for oligomerization in TSH receptor signaling. () TSH receptors initially exist in an open conformation as cleaved oligomers residing on the cell surface outside lipid rafts. Signal-transducing Gs proteins, on the other hand, are restricted to lipid rafts. () Following TSH binding, the oligomers break apart into monomers. Conversely, stimulating antibodies, as found in sera from patients with the autoimmune disorder Graves disease, are proposed to favor formation of TSH receptor dimers; blocking antibodies, are unable to bring about this conformational change. () Dissociated monomers, as well as dimers, move into the lipid rafts and bind to Gs proteins, thereby initiating the signaling cascade. In the case of TSH, the signal is rapid and brief because of faster movement of monomers into the lipid rafts, in contrast to the retarded movement of the dimers. Multivalent blocking TSHR antibodies may cross-link the oligomers, thereby preventing them from dissociating and impeding their entry into lipid rafts.