Vascular progenitors were previously isolated from blood and bone marrow; herein, we define the presence, phenotype, potential, and origin of vascular progenitors resident within adult skeletal muscle. Two distinct populations of cells were simultaneously isolated from hindlimb muscle: the side population (SP) of highly purified hematopoietic stem cells and non-SP cells, which do not reconstitute blood. Muscle SP cells were found to be derived from, and replenished by, bone marrow SP cells; however, within the muscle environment, they were phenotypically distinct from marrow SP cells. Non-SP cells were also derived from marrow stem cells and contained progenitors with a mesenchymal phenotype. Muscle SP and non-SP cells were isolated from Rosa26 mice and directly injected into injured muscle of genetically matched recipients. SP cells engrafted into endothelium during vascular regeneration, and non-SP cells engrafted into smooth muscle. Thus, distinct populations of vascular progenitors are resident within skeletal muscle, are derived from bone marrow, and exhibit different cell fates during injury-induced vascular regeneration. 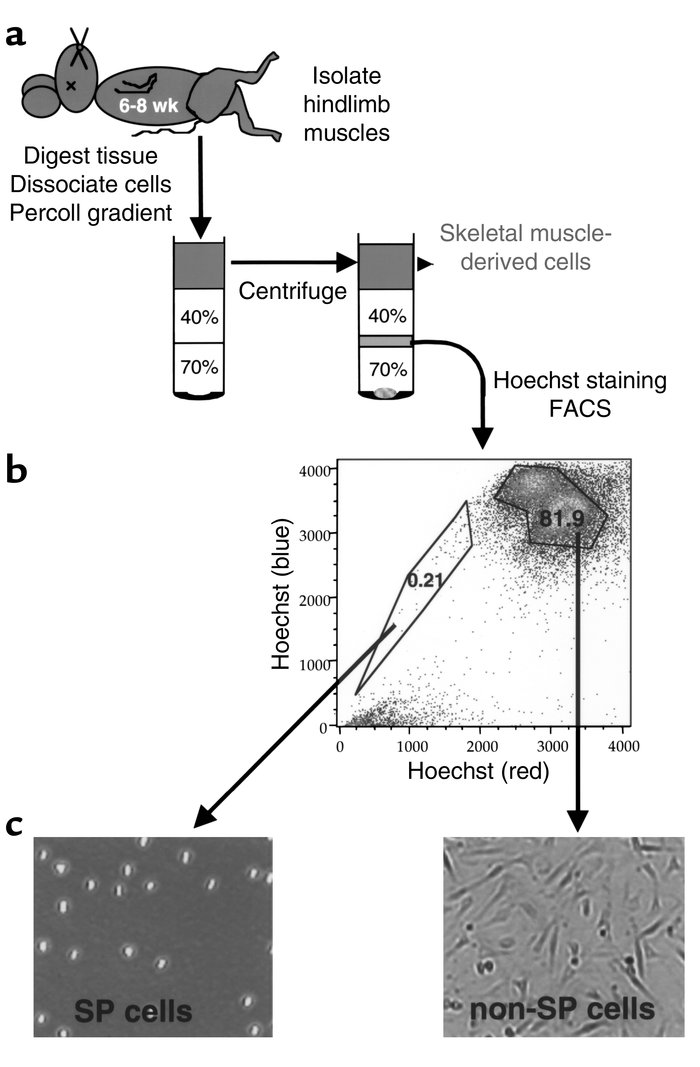 Isolation of murine skeletal muscle progenitors. () Skeletal muscle stem cells were isolated from 6- to 8-week-old C57Bl/6 or Rosa26 mice, fractionated on a Percoll gradient, stained with Hoechst 33342 dye, and subjected to FACS. SP and non-SP cells were clearly discernable based on Hoechst dye exclusion, and the distinct populations were isolated via FACS. () In this representative sample, the SP population was 0.21%, and the non-SP was 81.9% of the total viable cells. () Both SP and non-SP populations were cultured overnight, and their distinct morphologies were revealed upon microscopic examination of the cells in culture. The SP cells were found to be of uniform morphology and nonadherent. The non-SP population contained predominantly adherent, spindle-shaped cells.