Thyroid functions of mouse cathepsins B, K, and L

Thyroid functions of mouse cathepsins B, K, and L 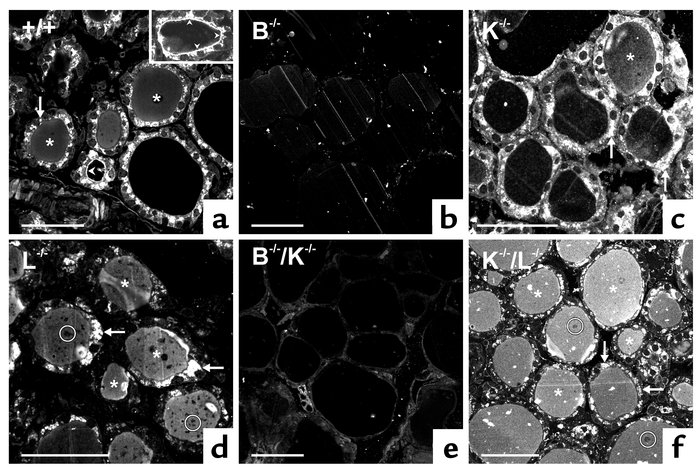 Redistribution of cathepsin B in thyroids of cathepsin , , or mice. Confocal fluorescence micrographs of cryosections of thyroid glands from WT mice () or cathepsin-deficient mice of the indicated genotypes (–) were immunolabeled with antibodies against cathepsin B. Thyroids from cathepsin B–deficient mice were not stained ( and ), indicating specificity of antibody labeling. Cathepsin B was detected within endocytic vesicles of thyroid epithelial cells (arrows). In WT mice, cathepsin B was also located at the apical plasma membrane of epithelial cells (arrowheads, inset) and within the lumina of thyroid follicles (asterisks). Deficiencies in cathepsin K and/or cathepsin L resulted in a redistribution of cell surface–associated cathepsin B, since immunolabelings of the apical plasma membranes were no longer observed. Rather, immunofluorescence became detectable over the follicle lumina (asterisks), and it was enhanced when compared with the WTs. Note the presence of non-immunolabeled inclusions within the thyroid follicle lumina of cathepsin or mice (open circles). Bars: 50 μm.