Stat3 is the most pleiotropic member of the signal transducer and activator of transcription (STAT) family of transcription factors and mediates pivotal responses for the cytokine family. In resting cells, STATs, including Stat3, reside largely in the cytoplasm. Upon cytokine stimulation, they rapidly translocate to the nucleus, where they promote the expression of target genes. During the subsequent period of signal decay they are re-exported back to the cytoplasm in preparation for the next round of signaling. This process of nuclear export can be blocked by the fungal toxin leptomycin B (LMB). In contrast to what appears to be the case for Stat1, LMB treatment not only blocks the poststimulation export of Stat3 from the nucleus back to the cytoplasm, but also promotes the nuclear accumulation of Stat3 in resting cells. Remarkably, the LMB-dependent nuclear accumulation of Stat3 in resting cells is independent of tyrosine phosphorylation, highlighting the existence of a “basal” signaling pathway. Subsequent studies identified three nuclear export signal (NES) elements. Two of these elements, Stat3306–318 and Stat3404–414, corresponded to those recently identified in Stat1, and a third, Stat3524–535, is novel. Stat3306–318 appears to be important in the rapid nuclear export seen after stimulation (poststimulation export), whereas the Stat3404–414 and Stat3524–535 play a more important role in regulating basal nuclear export. In summary, these studies indicate that the process of Stat3 nuclear export is dependent on multiple NES elements. 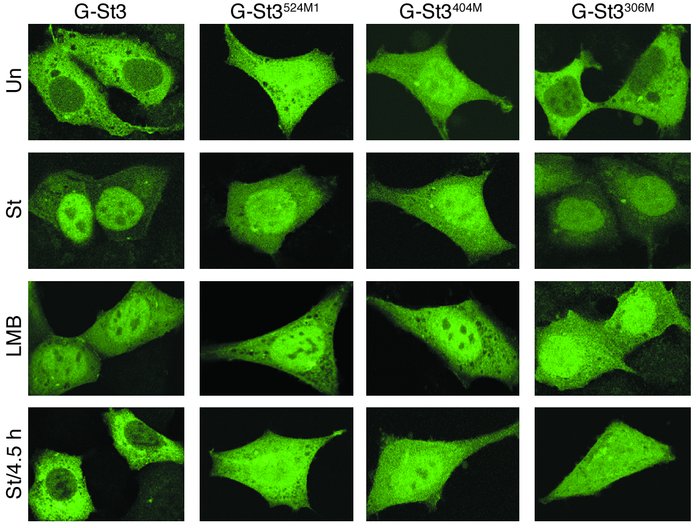