Stem cell factor stimulates neurogenesis in vitro and in vivo

Stem cell factor stimulates neurogenesis in vitro and in vivo 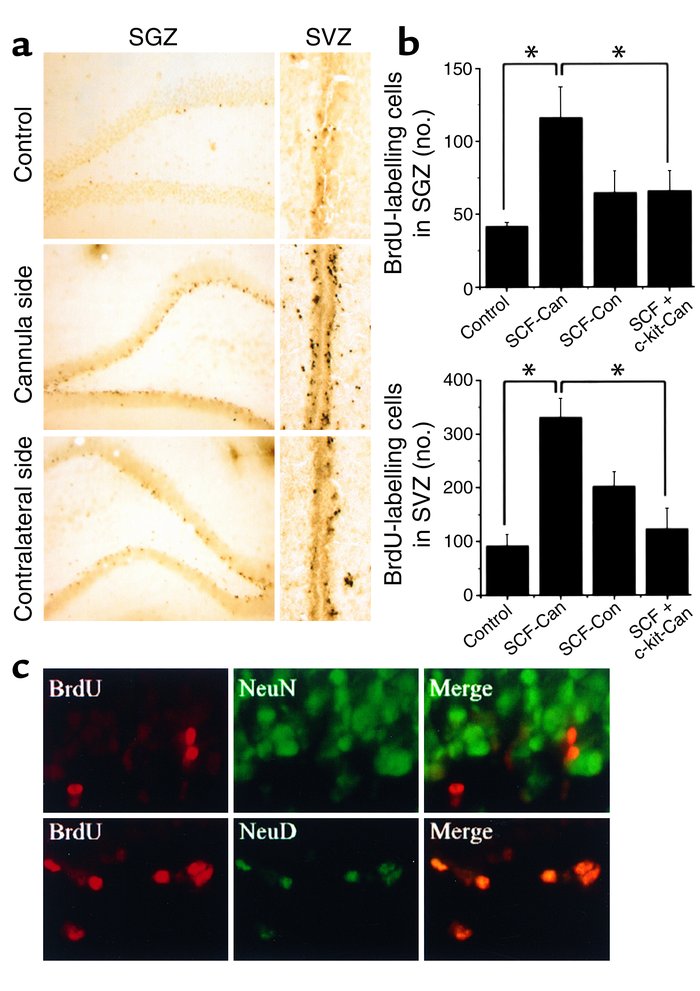 Intraventricular SCF stimulates BrdU incorporation in SGZ and SVZ in vivo. () Brain sections through SGZ and SVZ were immunostained with anti-BrdU Ab 1 week after intraventricular infusion of SCF or aCSF vehicle ( = 6). Compared with aCSF (control), SCF increased the number of BrdU-positive cells in SGZ and SVZ. Proliferation was more pronounced on the cannula side, as compared with the contralateral side. () BrdU-labeled cells in SGZ (top) and SVZ (bottom) were counted in control brain ( = 6) and both ipsilateral (cannula side) and contralateral to SCF infusion ( = 6). In some experiments, SCF was infused together with anti–c-kit Ab ( = 4). Bars (left to right) represent control; SCF-treated, cannula side; SCF-treated, control side; and SCF- and anti–c-kit-treated, cannula side. BrdU-positive cells were increased in SVZ on both the infused and contralateral sides and in SGZ on the infused side.The effect of SCF was partially blocked by coadministration of anti–c-kit Ab (* < 0.05, Student test). () Rat brain sections through SGZ, obtained 1 week after SCF infusion, were double-labeled for BrdU (red) and NeuN or Neuro D (green). Merged images show that BrdU labeling colocalized with Neuro D and, in some cases, NeuN. Data shown are representative fields from the number of experiments given above ( and ), or mean ± SEM ( = 3) ().