deletion in HSCs does not improve diet-induced hepatic steatosis. 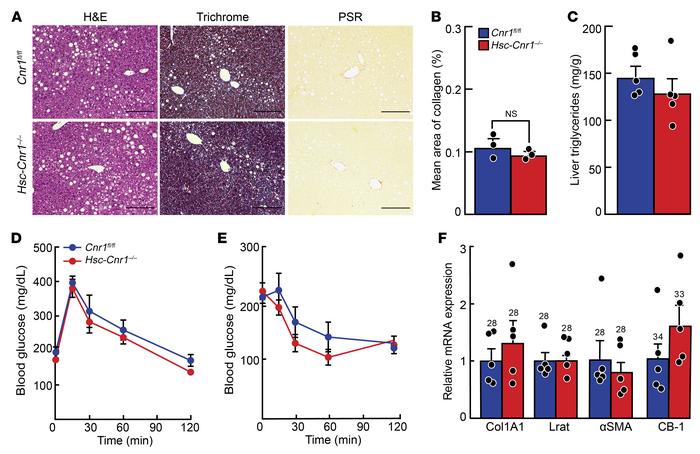 and mice were switched to an HFD supplemented with doxycycline for 12 weeks, starting at 6 weeks of age. Glucose and insulin tolerance tests were carried out 10 and 11 weeks after HFD feeding, respectively (6–7/group). () Representative H&E, trichrome, and PSR staining of liver sections. Scale bar: 300 μm. () Mean area of collagen was obtained by calculating the PSR-stained red area in the image under a split green channel, as described in the Methods. () Liver TG contents of and ( 5/group) mice after 12 weeks of HFD. ( and ) Blood glucose levels were measured in mice at indicated times after glucose administration () or insulin injection (). Mice in and were euthanized at 18 weeks of age. () Total RNA was extracted from each mouse liver, and the relative mRNA levels of , , (αSMA), and were quantified by qPCR. (β-actin) was used as an invariant control. Values were expressed relative to HFD-fed, doxycycline-treated mice, which was arbitrarily set to 1. Corresponding mean Ct values are denoted above. Results shown as mean ± SEM, assessed by ANOVA.