Insulin receptors (IRs) on vascular endothelial cells have been suggested to participate in insulin-regulated glucose homeostasis. To directly address the role of insulin action in endothelial function, we have generated a vascular endothelial cell IR knockout (VENIRKO) mouse using the Cre-loxP system. Cultured endothelium of VENIRKO mice exhibited complete rearrangement of the IR gene and a more than 95% decrease in IR mRNA. VENIRKO mice were born at the expected Mendelian ratio, grew normally, were fertile, and exhibited normal patterns of vasculature in the retina and other tissues. Glucose homeostasis under basal condition was comparable in VENIRKO mice. Both eNOS and endothelin-1 mRNA levels, however, were reduced by approximately 30–60% in endothelial cells, aorta, and heart, while vascular EGF expression was maintained at normal levels. Arterial pressure tended to be lower in VENIRKO mice on both low- and high-salt diets, and on a low-salt diet VENIRKO mice showed insulin resistance. Thus, inactivation of the IR on endothelial cell has no major consequences on vascular development or glucose homeostasis under basal conditions, but alters expression of vasoactive mediators and may play a role in maintaining vascular tone and regulation of insulin sensitivity to dietary salt intake. 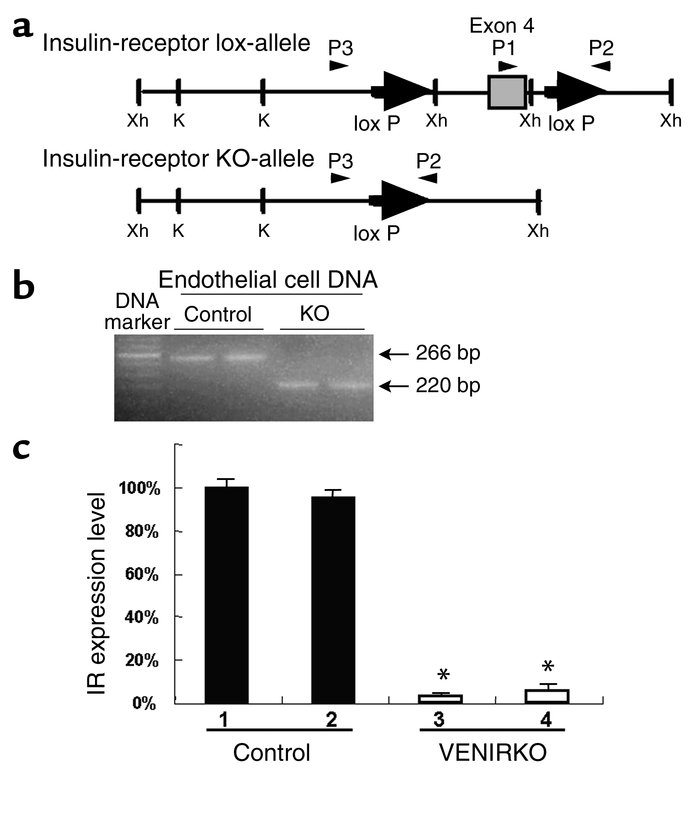