The loss function of cerebral cavernous malformation (CCM) genes leads to most CCM lesions characterized by enlarged leaking vascular lesions in the brain. Although we previously showed that NOGOB receptor (NGBR) knockout in endothelial cells (ECs) results in cerebrovascular lesions in the mouse embryo, the molecular mechanism by which NGBR regulates CCM1/2 expression has not been elucidated. Here, we show that genetic depletion of Ngbr in ECs at both postnatal and adult stages results in CCM1/2 expression deficiency and cerebrovascular lesions such as enlarged vessels, blood-brain-barrier hyperpermeability, and cerebral hemorrhage. To reveal the molecular mechanism, we used RNA-sequencing analysis to examine changes in the transcriptome. Surprisingly, we found that the acetyltransferase HBO1 and histone acetylation were downregulated in NGBR-deficient ECs. The mechanistic studies elucidated that NGBR is required for maintaining the expression of CCM1/2 in ECs via HBO1-mediated histone acetylation. ChIP-qPCR data further demonstrated that loss of NGBR impairs the binding of HBO1 and acetylated histone H4K5 and H4K12 on the promotor of the CCM1 and CCM2 genes. Our findings on epigenetic regulation of CCM1 and CCM2 that is modulated by NGBR and HBO1-mediated histone H4 acetylation provide a perspective on the pathogenesis of sporadic CCMs.

HBO1-mediated histone acetylation is involved in NGBR-regulated expression of CCM1 and CCM2 in brain ECs. 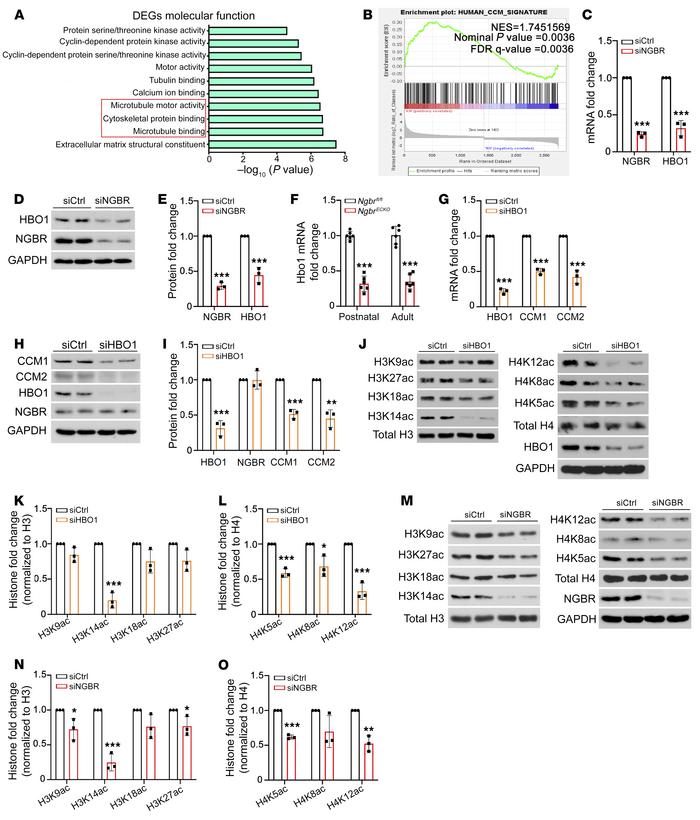 () RNA-seq analysis was carried out to determine the deficiency–promoted transcriptomic changes in HBMVECs. GO molecular function enrichment analysis of DEGs showed enrichment in microtubule and cytoskeleton protein binding. () GSEA of RNA-seq data (siNGBR group vs. siCtrl group) showed a positive correlation with the human CCM signature gene set, with an NES equal to 1.75 and nominal value and FDR value both less than 0.01. (–) The results of RT-qPCR and Western blotting confirmed the decreased expression of HBO1 in -knockdown HBMVECs. () mRNA level is decreased in MBMVECs isolated from the brain of postnatal and adult mice. (–) knockdown decreased the mRNA and protein levels of CCM1 and CCM2 in HBMVECs. (–) Either or knockdown in HBMVECs results in a similar alteration of histone acetylation: decreased acetylation of H3K14, H4K5, and H4K12. Data are presented as mean ± SD, 3 samples per group in vitro (, , , , , , , and ) and 6 mice per group in vivo (). Significance was tested by 2-tailed, unpaired Student’s test. * < 0.05, ** < 0.01, *** < 0.001.