During progression to both types 1 and 2 diabetes (T1D, T2D), there is a striking loss of glucose-induced first-phase insulin release (FPIR), which is known to predict the onset of T1D. The contribution of reduced β cell mass to the onset of hyperglycemia remains unclear. In this issue of the JCI, Mezza et al. report on their study of patients with pancreatic neoplasms before and after partial pancreatectomy to evaluate the impact of reduced β cell mass on the development of diabetes. The authors found that reduced FPIR predicted diabetes when 50% of the pancreas was removed. These findings suggest that low or absent FPIR indicates that β cell mass can no longer compensate for increased insulin needs. Notably, clinicians may use reduction of FPIR as a warning that progression to T2D is underway.

A hypothetical path to β cell failure in T2D. 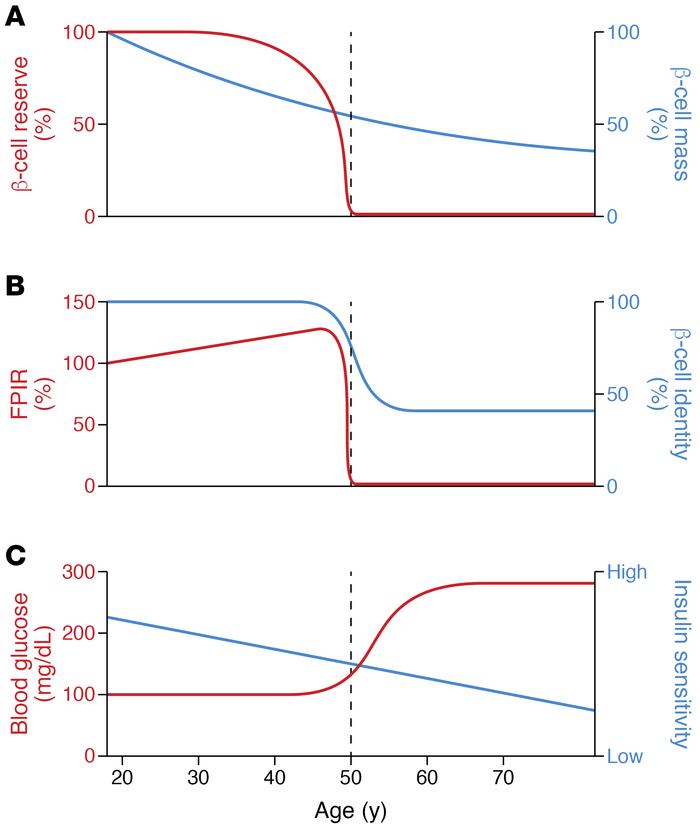 In this example, a hypothetical individual develops T2D at age 50, showing the loss of glucose-induced FPIR () as a marker of impending β cell failure. β Cell failure occurs after years of successful compensation that kept blood glucose levels normal in the face of climbing insulin resistance (shown as falling insulin sensitivity) () and gradually declining β cell mass (). Note the early increase in FPIR, which contributes to the compensation for insulin resistance. With time, β cell reserve is expended, leaving β cell mass () as inadequate, resulting in the onset of β cell failure, shown as a marked fall in FPIR associated with changes in β cell gene expression. Glucose levels () then rise and cause further disruption of β cell identity and function. There can be variations of this general pattern; for example, the ratios of insulin sensitivity to cell mass can be very different, but lead to the same point of decompensation marked by loss of FPIR. Even without insulin resistance, some can go through this progression as their β cells fail