BACKGROUND The appearance of hyperglycemia is due to insulin resistance, functional deficits in the secretion of insulin, and a reduction of β cell mass. There is a long-standing debate as to the relative contribution of these factors to clinically manifesting β cell dysfunction. The aim of this study was to verify the acute effect of one of these factors, the reduction of β cell mass, on the subsequent development of hyperglycemia.METHODS To pursue this aim, nondiabetic patients, scheduled for identical pancreaticoduodenectomy surgery, underwent oral glucose tolerance tests (OGTT) and hyperglycemic clamp (HC) procedures, followed by arginine stimulation before and after surgery. Based on postsurgery OGTT, subjects were divided into 3 groups depending on glucose tolerance: normal glucose tolerance (post-NGT), impaired glucose tolerance (post-IGT), or having diabetes mellitus (post-DM).RESULTS At baseline, the 3 groups showed similar fasting glucose and insulin levels; however, examining the various parameters, we found that reduced first-phase insulin secretion, reduced glucose sensitivity, and rate sensitivity were predictors of eventual postsurgery development of IGT and diabetes.CONCLUSION Despite comparable functional mass and fasting glucose and insulin levels at baseline and the very same 50% mass reduction, only reduced first-phase insulin secretion and glucose sensitivity predicted the appearance of hyperglycemia. These functional alterations could be pivotal to the pathogenesis of type 2 diabetes (T2DM).TRIAL REGISTRATION ClinicalTrials.gov NCT02175459.FUNDING Università Cattolica del Sacro Cuore; Italian Ministry of Education, University and Research; European Foundation for the Study of Diabetes. 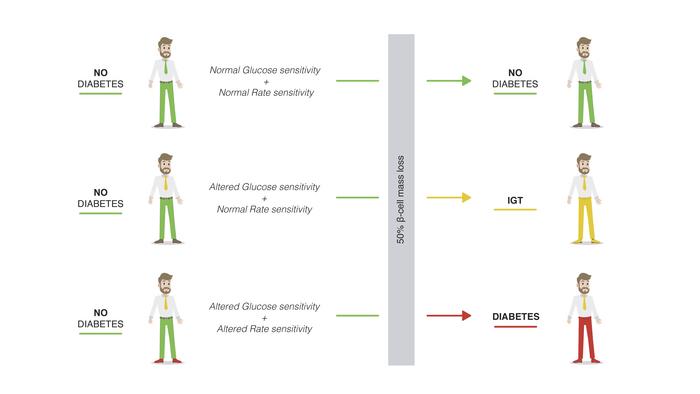