Inter-α inhibitor proteins (IAIPs) are a family of endogenous plasma and extracellular matrix molecules. IAIPs suppress proinflammatory cytokines, limit excess complement activation, and bind extracellular histones to form IAIP-histone complexes, leading to neutralization of histone-associated cytotoxicity in models of sepsis. Many of these detrimental processes also play critical roles in the pathophysiology of ischemic stroke. In this study, we first assessed the clinical relevance of IAIPs in stroke and then tested the therapeutic efficacy of exogenous IAIPs in several experimental stroke models. IAIP levels were reduced in both ischemic stroke patients and in mice subjected to experimental ischemic stroke when compared with controls. Post-stroke administration of IAIP significantly improved stroke outcomes across multiple stroke models, even when given 6 hours after stroke onset. Importantly, the beneficial effects of delayed IAIP treatment were observed in both young and aged mice. Using targeted gene expression analysis, we identified a receptor for complement activation, C5aR1, that was highly suppressed in both the blood and brain of IAIP-treated animals. Subsequent experiments using C5aR1-knockout mice demonstrated that the beneficial effects of IAIPs are mediated in part by C5aR1. These results indicate that IAIP is a potential therapeutic candidate for the treatment of ischemic stroke. 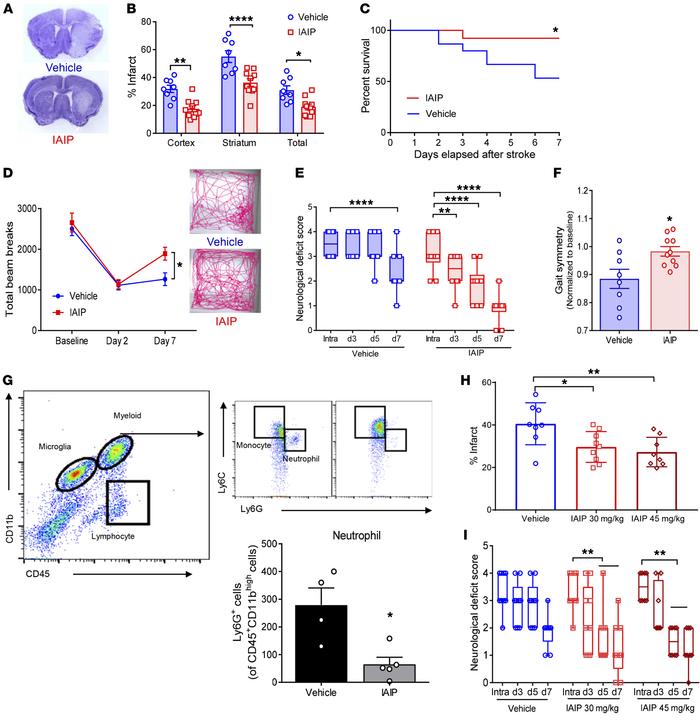