It has been revealed that 2′3′-cyclic-GMP-AMP (cGAMP), a second messenger that activates the antiviral stimulator of IFN genes (STING), elicits an antitumoral immune response. Since cGAMP cannot cross the cell membrane, it is not clear how intracellular STING has been activated by extracellular cGAMP until SLC19A1 was identified as an importer to transport extracellular cGAMP into the cytosol. However, SLC19A1-deficient cells also sense extracellular cGAMP, suggesting the presence of mechanisms other than the facilitating transporters for STING sensing extracellular cGAMP. Here, using immunoprecipitation, immunofluorescence, and flow cytometry, we identified an alternatively spliced STING isoform, plasmatic membrane STING (pmSTING), that localized in the plasma membrane with its C-terminus outside the cell, due to a lack of 1 transmembrane domain in its N-terminus compared with canonical STING. Further studies showed that extracellular cGAMP not only promoted the dimerization of pmSTING and interaction of pmSTING with TANK-binding kinase 1 (TBK1) and IFN regulatory factor 3 (IRF3), but also enhanced the phosphorylation of TBK1 and IRF3 and the production of IFN in pmSTING-transfected cells. Additionally, we also identified similar pmSTING isoforms in other species including human. This study suggests a conserved role for pmSTING in sensing extracellular cGAMP and provides insight into the role of cGAMP as an immunotransmitter. 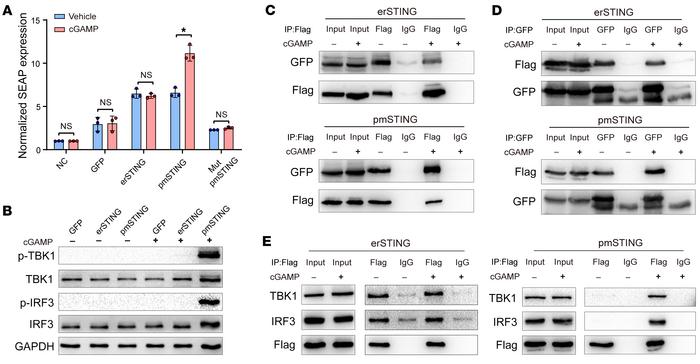