Human thyrotropin (TSH), luteotropin (LH), follitropin (FSH), and chorionic gonadotropin are members of the heterodimeric glycoprotein hormone family. The common α subunit forms noncovalent heterodimers with different β subunits. Two novel human glycoprotein hormonelike genes, α2 (A2) and β5 (B5), recently have been identified. Using a yeast two-hybrid assay, the two subunits were found as potential heterodimerization partners. Immunological analyses confirmed the heterodimerization of A2 and B5 in transfected cells and their colocalization in the anterior pituitary. Recombinant A2/B5 heterodimeric glycoproteins, purified using cation exchange and size fractionation chromatography, activated human TSH receptors, but not LH and FSH receptors, and showed high affinity to TSH receptors in a radioligand receptor assay. The heterodimer also stimulated cAMP production and thymidine incorporation by cultured thyroid cells and increased serum thyroxine levels in TSH-suppressed rats in vivo. This new heterodimeric glycoprotein hormone was named as thyrostimulin based on its thyroid-stimulating activity. The expression of thyrostimulin in the anterior pituitary known to express TSH receptors suggested a paracrine mechanism. The present discovery of a new ligand based on genomic approaches could facilitate the understanding of the physiological roles of extra-thyroid TSH receptor systems and the structural-functional basis of receptor signaling by related glycoprotein hormones. 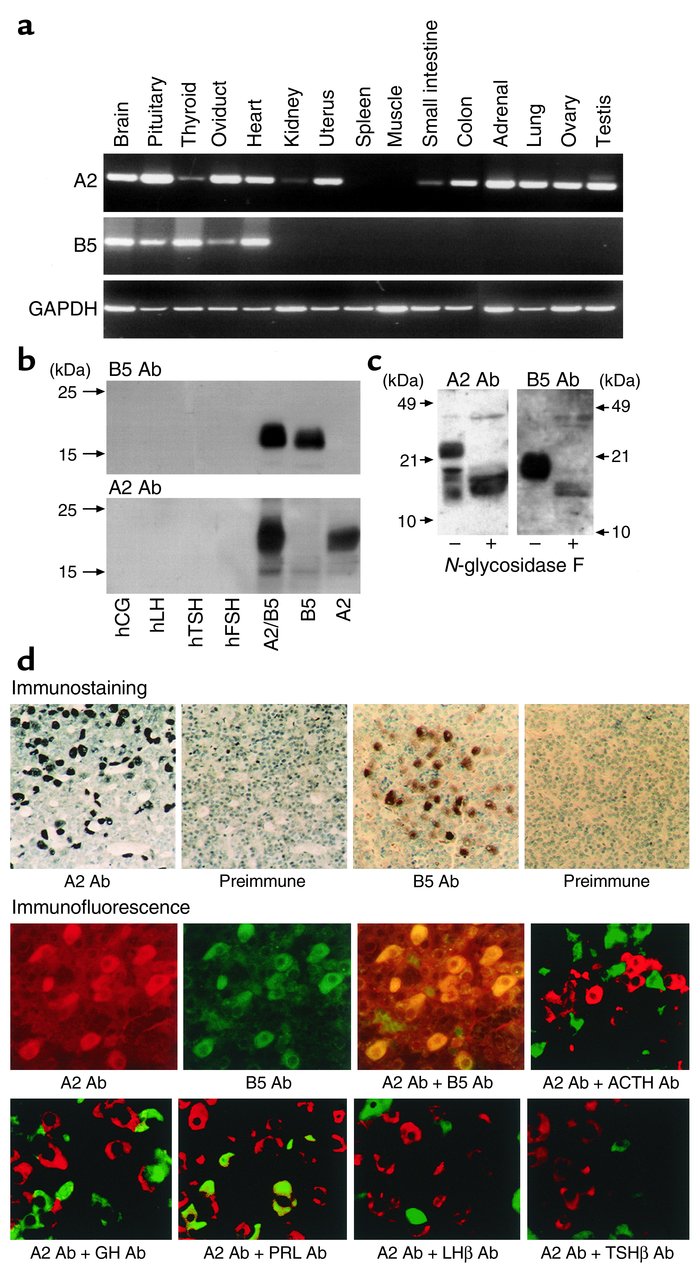 Expression of A2 and B5 mRNA in rat tissues and immunoanalyses of A2 and B5 in the anterior pituitary. () RT-PCR analysis of A2 and B5 transcripts in rat tissues. Amplification of the GAPDH message levels reflected differences in cDNA loading. () Hormonal specificity of Ab’s against A2 and B5. Immunoblotting analysis indicated that Ab’s against A2 or B5 recognized proteins secreted by 293T cells transfected with expression plasmids encoding A2 or B5, or A2 and B5. However, no signal could be found in lanes loaded with 500 ng of recombinant human (h) CG, LH, FSH, or TSH. A lower band in the A2 immunoblot was found to be nonspecific. () Immunoblot analysis of A2 and B5 in the rat anterior pituitary. Pituitary extracts were used for analysis. Some samples were pretreated with -glycosidase F. () Immunostaining of A2 and B5. Anterior pituitary showed positive staining using A2 or B5 Ab’s (upper panel), whereas the preimmune serum was ineffective. Double-fluorescent immunostaining was performed using a B5 Ab followed by the fluorescein-conjugated AffiniPure Fab fragment goat anti-rabbit IgG (middle panel). Subsequently, the same section was incubated with the A2 Ab followed by Texas red dye–conjugated AffiniPure goat anti-rabbit intact IgG. The images for A2 (red) and B5 (green) were merged (yellow) to demonstrate the coexpression of these two subunits. As a negative control, omission of the A2 Ab did not lead to signals derived from the Texas red dye (data not shown). Using the double-immunostaining approach, a lack of coexpression was found between A2 (red) and ACTH, growth hormone (GH), prolactin (PRL), LH-β, or TSH-β (all in green; middle and lower panels).