The melanocortin 4 receptor (MC4R) plays a critical role in the long-term regulation of energy homeostasis, and mutations in the MC4R are the most common cause of monogenic obesity. However, the precise molecular and cellular mechanisms underlying the maintenance of energy balance within MC4R-expressing neurons are unknown. We recently reported that the MC4R localizes to the primary cilium, a cellular organelle that allows for partitioning of incoming cellular signals, raising the question of whether the MC4R functions in this organelle. Here, using mouse genetic approaches, we found that cilia were required specifically on MC4R-expressing neurons for the control of energy homeostasis. Moreover, these cilia were critical for pharmacological activators of the MC4R to exert an anorexigenic effect. The MC4R is expressed in multiple brain regions. Using targeted deletion of primary cilia, we found that cilia in the paraventricular nucleus of the hypothalamus (PVN) were essential to restrict food intake. MC4R activation increased adenylyl cyclase (AC) activity. As with the removal of cilia, inhibition of AC activity in the cilia of MC4R-expressing neurons of the PVN caused hyperphagia and obesity. Thus, the MC4R signaled via PVN neuron cilia to control food intake and body weight. We propose that defects in ciliary localization of the MC4R cause obesity in human inherited obesity syndromes and ciliopathies.

Deletion of in MC4R-expressing neurons leads to obesity. 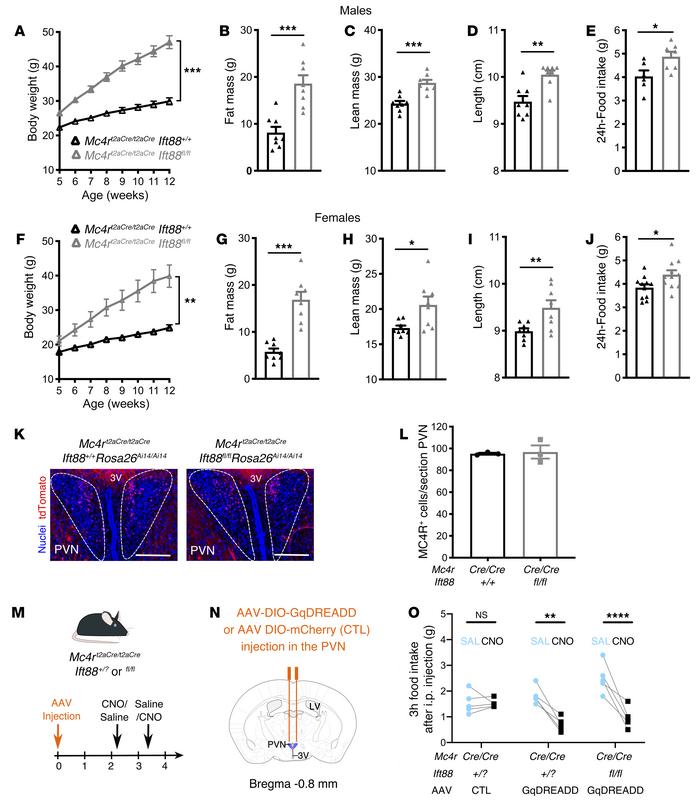 (–) Phenotyping of control and male (–) and female (–) mice. Body weights of mice were measured weekly from 5 to 12 weeks of age ( and ). Fat mass ( and ) and lean mass ( and ) (measured by EchoMRI) and body length ( and ) were assessed in mice at 12 weeks of age ( 8 mice per group). ( and ) Twenty-four-hour food intake at 12 weeks of age (females, 11 control and = 11 experimental mice; males, 6 control and = 7 experimental mice). () Representative images of the PVN, in which MC4R-expressing neurons express red fluorescent protein (tdTomato) in both (left) and (right) mice. Scale bars: 200 μm. () Quantification of the number of MC4R-expressing neurons in and mice ( 3 PVN sections per group, NS). (–) Chemogenetic activation of MC4R neurons in and mice. () Schematic of the experimental timeline: 7- to 14-week-old male mice were stereotaxically injected with AAV DIO-GqDREADD or AAV DIO-mCherry and then tested either for CNO or saline 2 weeks and 3 weeks after injection, using a randomized crossover design. () Schematic of bilateral stereotaxic injections (coordinates: AP = –0.8, ML = ±0.25, DV = –5.2) of AAV DIO-GqDREADD or AAV DIO-mCherry as a control (CTL). () Three-hour food intake following injection of saline (SAL) or CNO in 3 groups of mice ( 5 per group): injected with AAV DIO-mCherry (negative control), mice injected with AAV DIO-GqDREADD (positive control), and mice injected with AAV DIO-GqDREADD. Mice were fasted for 24 hours prior to injection. Data represent the mean ± SEM. * 0.05, ** 0.01, *** 0.001, and **** < 0.0001, by tudent’s test (–, –, and ) or repeated-measures 2-way ANOVA followed by Sidak’s multiple-comparison test (, , and ). 3V, third ventricle; LV, lateral ventricle.