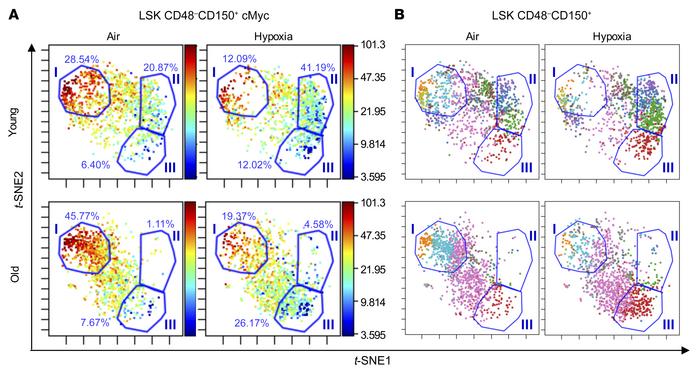 BM from young and old C57BL/6 donor mice was collected and processed as in . Samples were stained with the indicated antibodies conjugated to metal (see ) and then analyzed with a CyTOF 2 mass cytometer and Cytobank software. () cMyc levels within gated LSK CD48–CD150+ plots using viSNE analysis. Scales indicate the mean marker intensity of arcsinh-transformed values. () Gated LSK CD48–CD150+ LT-HSCs were used to make viSNE plots, where different colors indicate the subpopulations explored (10 in all; see for subpopulation definitions). In and , the cell populations changed by ambient air exposure are labeled as gates I, II, and III, and the percentage of cells within the gate is indicated. -SNE1,-2, -distributed stochastic neighbor embedding.