Deficiency of UDP-galactose:N-acetylglucosamine β-1,4-galactosyltransferase I causes the congenital disorder of glycosylation type IId

Deficiency of UDP-galactose:N-acetylglucosamine β-1,4-galactosyltransferase I causes the congenital disorder of glycosylation type IId

Deficiency of the Golgi enzyme UDP-Gal:N-acetylglucosamine β-1,4-galactosyltransferase I (β4GalT I) (E.C.2.4.1.38) causes a new congenital disorder of glycosylation (CDG), designated type IId (CDG-IId), a severe neurologic disease characterized by a hydrocephalus, myopathy, and blood-clotting defects. Analysis of oligosaccharides from serum transferrin by HPLC, mass spectrometry, and lectin binding revealed the loss of sialic acid and galactose residues. In skin fibroblasts and leukocytes, galactosyltransferase activity was reduced to 5% that of controls. In fibroblasts, a truncated polypeptide was detected that was about 12 kDa smaller in size than wild-type β4GalT I and that failed to localize to the Golgi apparatus. Sequencing of the β4GalT I cDNA and gene revealed an insertion of a single nucleotide (1031-1032insC) leading to premature translation stop and loss of the C-terminal 50 amino acids of the enzyme. The patient was homozygous and his parents heterozygous for this mutation. Expression of a corresponding mutant cDNA in COS-7 cells led to the synthesis of a truncated, inactive polypeptide, which localized to the endoplasmic reticulum. 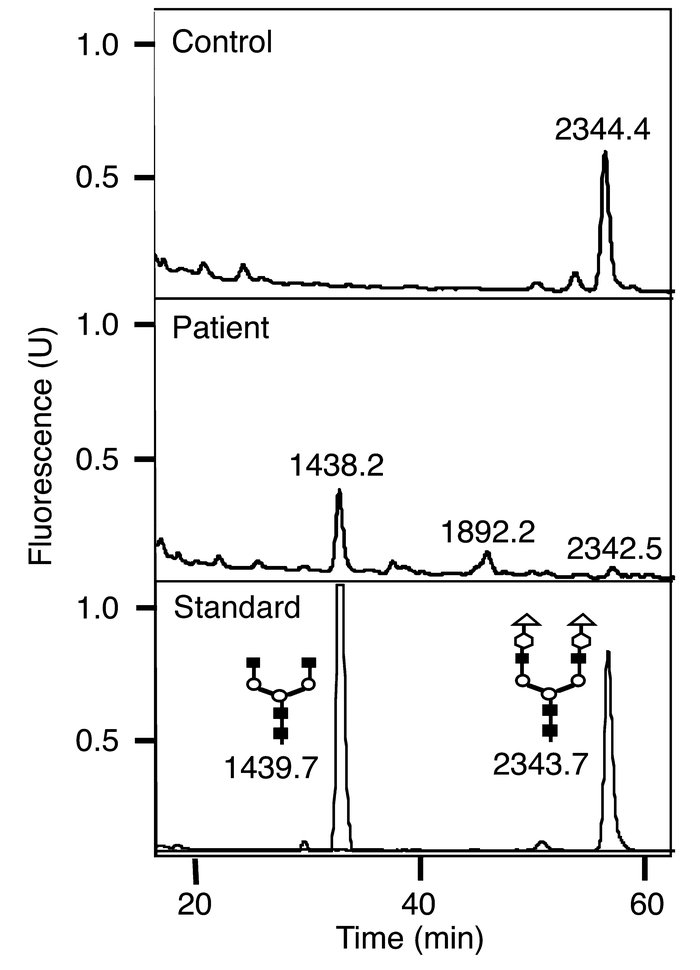 HPLC and mass spectrometric analysis of transferrin-linked oligosaccharides. Transferrin was purified from the serum of a control and the CDG-IId patient. Oligosaccharides were released by PNGase F digestion and subsequently analyzed by HPLC. The peak fractions were further investigated by mass spectrometry. The values over the HPLC peaks indicate the detected masses. Squares, -acetylglucosamine; circles, mannose; hexagons, galactose; triangles, neuraminic acid.