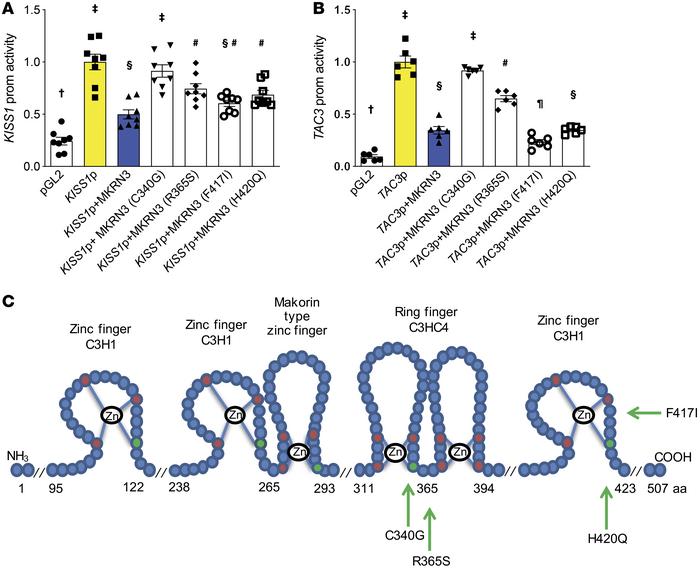 Effect of missense MKRN3 mutations identified in patients with CPP on () and () promoter activity. The mutants located in the RING finger domain, p.C340G and p.R365S, lost the ability to inhibit the and promoters, similarly to WT MKRN3. The mutant located in the zinc finger domain, p.F417I, inhibited the and promoters at least as effectively as WT MKRN3, while p.H420Q, located in the same domain as F417, inhibited the promoter similarly to WT MKRN3 but had compromised ability to inhibit the promoter. Yellow bars represent the or promoter, blue bars represent the or promoter with cotransfection of MKRN3. Groups with different symbols (†, ‡, §, #, ¶) are significantly different ( < 0.05), as determined by 1-way ANOVA followed by Student–Newman–Keuls test. () Schematic representation of the makorin ring finger protein encoded by MKRN3 showing the zinc finger domains, which are RNA binding domains, the RING finger domain, responsible for E3 ubiquitin ligase activity, and the specific makorin-type domain. The arrows point to the locations of the missense mutations studied here. Zn, zinc finger; pink circles, cysteine residues in the zinc fingers; green circles, histidine residues in the zinc fingers; blue circles represent the amino acids in the protein. The numbers underneath the schematic indicate amino acid locations in the protein.