LMNA mutations in patients are responsible for a dilated cardiomyopathy. Molecular mechanisms underlying the origin and development of the pathology are unknown. Herein, using mouse pluripotent embryonic stem cells (ESCs) and a mouse model both harboring the p.H222P Lmna mutation, we found early defects in cardiac differentiation of mutated ESCs and dilatation of mutated embryonic hearts at E13.5, pointing to a developmental origin of the disease. Using mouse ESCs, we demonstrated that cardiac differentiation of LmnaH222P/+ was impaired at the mesodermal stage. Expression of Mesp1, a mesodermal cardiogenic gene involved in epithelial-to-mesenchymal transition of epiblast cells, as well as Snai1 and Twist expression, was decreased in LmnaH222P/+ cells compared with WT cells in the course of differentiation. In turn, cardiomyocyte differentiation was impaired. ChIP assay of H3K4me1 in differentiating cells revealed a specific decrease of this histone mark on regulatory regions of Mesp1 and Twist in LmnaH222P/+ cells. Downregulation or inhibition of LSD1 that specifically demethylated H3K4me1 rescued the epigenetic landscape of mesodermal LmnaH222P/+ cells and in turn contraction of cardiomyocytes. Inhibition of LSD1 in pregnant mice or neonatal mice prevented cardiomyopathy in E13.5 LmnaH222P/H222P offspring and adults, respectively. Thus, LSD1 appeared to be a therapeutic target to prevent or cure dilated cardiomyopathy associated with a laminopathy. 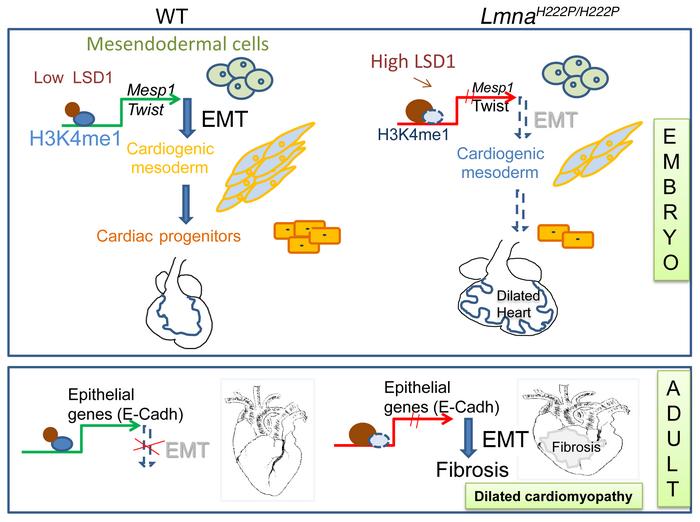