Prevalence and pathogenicity of autoantibodies in patients with idiopathic CD4 lymphopenia

Prevalence and pathogenicity of autoantibodies in patients with idiopathic CD4 lymphopenia

BACKGROUND Idiopathic CD4 lymphopenia (ICL) is defined by persistently low CD4+ cell counts (<300 cells/μL) in the absence of a causal infection or immune deficiency and can manifest with opportunistic infections. Approximately 30% of ICL patients develop autoimmune disease. The prevalence and breadth of their autoantibodies, however, and their potential contribution to pathogenesis of ICL remain unclear.METHODS We hybridized 34 and 51 ICL patients’ sera to a 9,000-human-proteome array and to a 128-known-autoantigen array, respectively. Using a flow-based method, we characterized the presence of anti-lymphocyte Abs in the whole cohort of 72 patients, as well as the Ab functional capability of inducing Ab-dependent cell-mediated cytotoxicity (ADCC), complement deposition, and complement-dependent cytotoxicity (CDC). We tested ex vivo the activation of the classical complement pathway on ICL CD4+ T cells.RESULTS All ICL patients had a multitude of autoantibodies mostly directed against private (not shared) targets and unrelated quantitatively or qualitatively to the patients’ autoimmune disease status. The targets included lymphocyte intracellular and membrane antigens, confirmed by the detection by flow of IgM and IgG (mostly IgG1 and IgG4) anti–CD4+ cell Abs in 50% of the patients, with half of these cases triggering lysis of CD4+ T cells. We also detected in vivo classical complement activation on CD4+ T cells in 14% of the whole cohort.CONCLUSION Our data demonstrate that a high prevalence of autoantibodies in ICL, some of which are specific for CD4+ T cells, may contribute to pathogenesis, and may represent a potentially novel therapeutic target.TRIAL REGISTRATION ClinicalTrials.gov NCT00867269.FUNDING NIAID and National Institute of Arthritis and Musculoskeletal and Skin Diseases of the NIH. 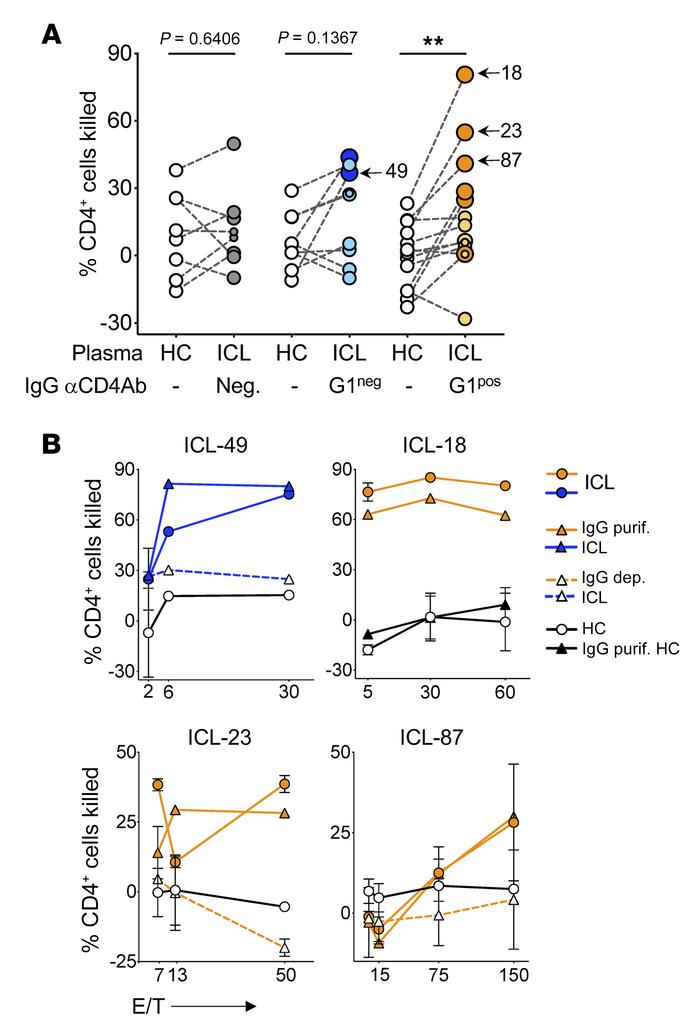 Percentage of HC CD4+ T cells killed by ADCC as described in the Methods. () Paired median percentage of killing induced by ICL (closed circles) or by HC (open circles) plasma. Each pair of data represents 1 to 6 independent experiments in which the comparison between ICL and HC was done at a specific effector/target ratio (E/T). Data pooled from 25 independent experiments with E/T ranging between 40 and 60. Bigger and darker blue and orange circles correspond to patients with positive ADCC killing, determined when the subtraction of percentage ICL killing minus percentage HC killing was greater than 20. ICL patients were divided into 3 groups depending on anti-CD4 Ab presence and isotype: Neg. in gray, patients with no IgG Ab; G1neg in blue, patients with any IgG isotype other than IgG1; G1pos in orange, patients with IgG1 isotype. Numbers by the arrows identify the ICL patients with ADCC assays shown in . ** < 0.01 by a 2-tailed, paired Wilcoxon’s test. () Representative experiments showing ADCC of CD4+ T cells induced by the plasma from the 4 patients identified by arrows in , compared with HC plasma in open circles, at different E/T. We represent average percentage of killing from duplicate wells with their standard deviation. IgG was purified (purif.) from HC or ICL plasma as described in the Methods and it is shown in closed triangles. ADCC by IgG-depleted plasma is shown by dashed lines.