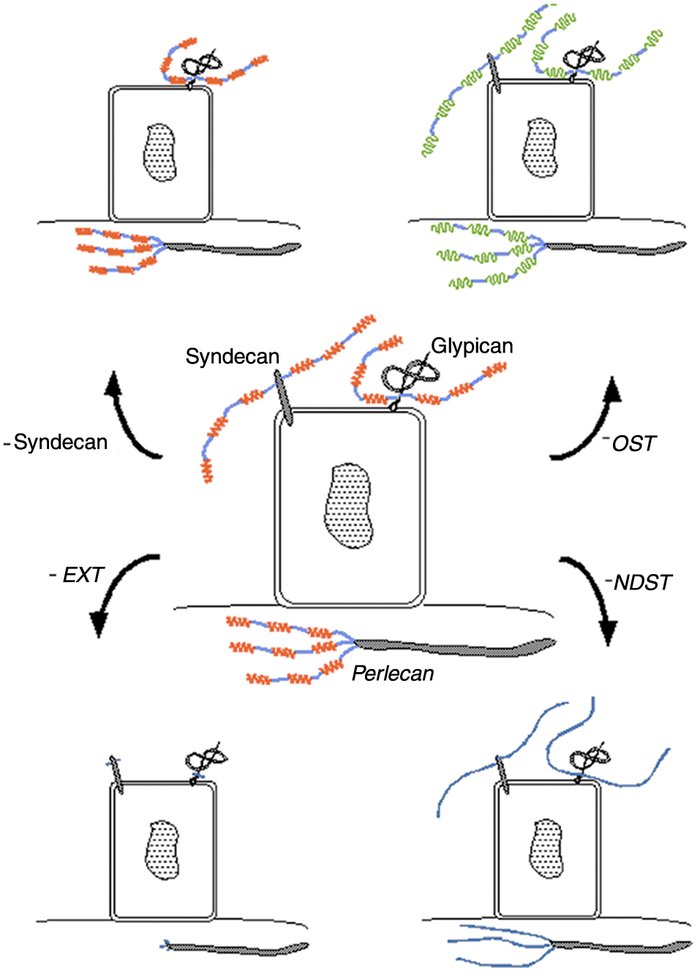 Targeting of genes important for HS expression. In the central part of the figure a cell and three different HS proteoglycans are shown. HS structure does not appear to be core protein–specific. Rather, HS chains of all proteoglycans synthesized by a certain cell have a similar structure. The HS chains contain sulfated regions (red) as well as unmodified regions (blue). The proteoglycan with its core protein embedded in the lipid bilayer belongs to the syndecan family (four members identified), while the other cell surface proteoglycan is a member of the glypican family (six members identified), attached to the cell surface via a GPI-anchor (). The HS proteoglycan perlecan is found in the basement membrane underlying the cell (). As shown in the figure, when genes of enzymes involved in polymerization of the HS chain are targeted (– ), only short stubs containing the HS linkage region will be attached to all three core proteins. Targeting of NDST genes (– ) results in the synthesis of unsulfated polysaccharide chains, whereas lack of any of the other modifying enzymes changes the fine structure of the HS chain (– ; green) without altering its domain structure. Since several of the enzymes occur in isoforms, the alterations in HS structure may be more complex than shown in the figure. Targeting of a core protein (– Syndecan) will of course result in the lack of this particular proteoglycan at the cell surface.