The brain has evolved in an environment where food sources are scarce, and foraging for food is one of the major challenges for survival of the individual and species. Basic and clinical studies show that obesity or overnutrition leads to overwhelming changes in the brain in animals and humans. However, the exact mechanisms underlying the consequences of excessive energy intake are not well understood. Neurons expressing the neuropeptide hypocretin/orexin (Hcrt) in the lateral/perifonical hypothalamus (LH) are critical for homeostatic regulation, reward seeking, stress response, and cognitive functions. In this study, we examined adaptations in Hcrt cells regulating behavioral responses to salient stimuli in diet-induced obese mice. Our results demonstrated changes in primary cilia, synaptic transmission and plasticity, cellular responses to neurotransmitters necessary for reward seeking, and stress responses in Hcrt neurons from obese mice. Activities of neuronal networks in the LH and hippocampus were impaired as a result of decreased hypocretinergic function. The weakened Hcrt system decreased reward seeking while altering responses to acute stress (stress-coping strategy), which were reversed by selectively activating Hcrt cells with chemogenetics. Taken together, our data suggest that a deficiency in Hcrt signaling may be a common cause of behavioral changes (such as lowered arousal, weakened reward seeking, and altered stress response) in obese animals.

Paradigm depicting the potential consequences of changes that occur in Hcrt cells in obese mice. 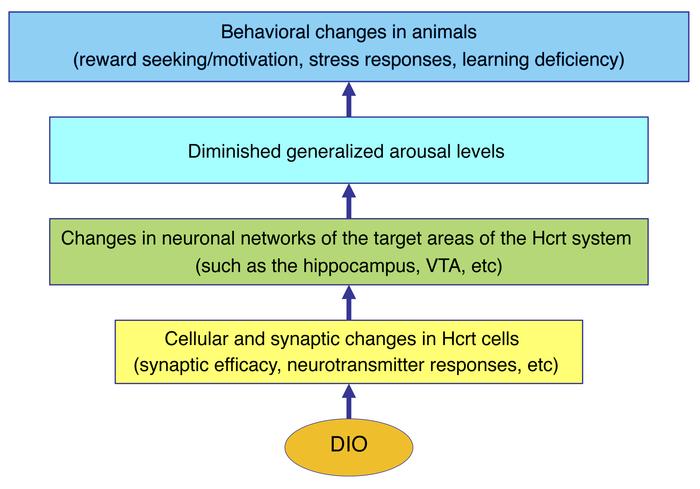 These changes can lead to altered activities in neuronal networks downstream of the Hcrt system, which would affect arousal levels as well as animal behaviors governed by the Hcrt system.