Growing evidence shows that alterations occurring at early developmental stages contribute to symptoms manifested in adulthood in the setting of neurodegenerative diseases. Here, we studied the molecular mechanisms causing giant axonal neuropathy (GAN), a severe neurodegenerative disease due to loss-of-function of the gigaxonin–E3 ligase. We showed that gigaxonin governs Sonic Hedgehog (Shh) induction, the developmental pathway patterning the dorso-ventral axis of the neural tube and muscles, by controlling the degradation of the Shh-bound Patched receptor. Similar to Shh inhibition, repression of gigaxonin in zebrafish impaired motor neuron specification and somitogenesis and abolished neuromuscular junction formation and locomotion. Shh signaling was impaired in gigaxonin-null zebrafish and was corrected by both pharmacological activation of the Shh pathway and human gigaxonin, pointing to an evolutionary-conserved mechanism regulating Shh signaling. Gigaxonin-dependent inhibition of Shh activation was also demonstrated in primary fibroblasts from patients with GAN and in a Shh activity reporter line depleted in gigaxonin. Our findings establish gigaxonin as a key E3 ligase that positively controls the initiation of Shh transduction, and reveal the causal role of Shh dysfunction in motor deficits, thus highlighting the developmental origin of GAN. 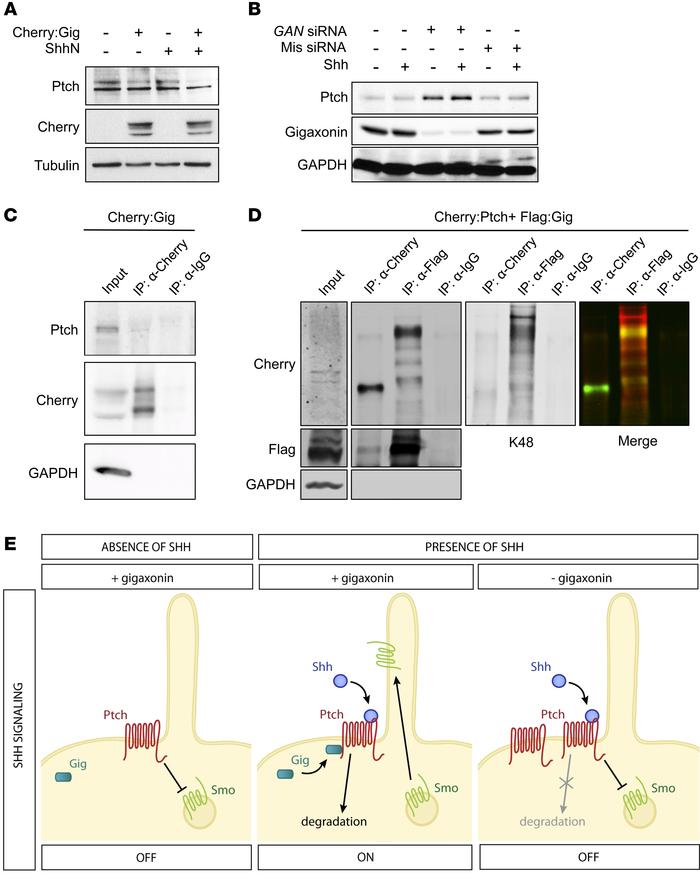 () NIH-3T3 cells were transfected with human Cherry-Gig plasmid ± 3 μg/mL Shh for 48 hours. Degradation of endogenous Ptch protein occurs only in the presence of both ectopic gigaxonin and Shh. () Repression of the endogenous gigaxonin using siRNA causes an increase of the endogenous Ptch levels in Shh Light-2 cells, which is potentiated by Shh induction. ( and ) Interaction between gigaxonin and Ptch, as revealed by reverse immunoprecipitation on both endogenous () and ectopic () Ptch protein. Shh Light-2 cells transfected with human Cherry-Gig (); COS-7 cells transfected with zebrafish 3Flag-Gig and zebrafish Cherry-Ptch (). IgG serves as an internal negative control. () Cherry immunoprecipitation identifies Ptch proteins, which are mainly not modified, while the Ptch pool enriched in gigaxonin immunocomplex presents a laddering overlapping with K48-specific ubiquitin chain. () Model of action of the gigaxonin–E3 ligase in the initiation of Shh signaling. In an off state (left), prior to Shh activation, receiving cells silence the cascade through the inhibitory effect of the Ptch receptor on the effector Smo. Upon Shh production, the active Shh form is released and received by progenitor cells. Gigaxonin acts as an initiator of signal transduction by degrading Shh-bound Ptch receptor (middle), hence allowing the derepression of the signal transducer Smo, which translocates into the cilium to activate the pathway. In the absence of gigaxonin (right), receiving tissues are unable to interpret Shh signaling, due to the constitutive repression of Smo induced by the accumulation of Shh-bound Ptch receptor.