This study investigates the relationship between helminth infection and allergic sensitization by assessing the influence of preexisting allergy on the outcome of helminth infections, rather than the more traditional approach in which the helminth infection precedes the onset of allergy. Here we used a murine model of house dust mite–induced (HDM-induced) allergic inflammation followed by Ascaris infection to demonstrate that allergic sensitization drives an eosinophil-rich pulmonary type 2 immune response (Th2 cells, M2 macrophages, type 2 innate lymphoid cells, IL-33, IL-4, IL-13, and mucus) that directly hinders larval development and reduces markedly the parasite burden in the lungs. This effect is dependent on the presence of eosinophils, as eosinophil-deficient mice were unable to limit parasite development or numbers. In vivo administration of neutralizing antibodies against CD4 prior to HDM sensitization significantly reduced eosinophils in the lungs, resulting in the reversal of the HDM-induced Ascaris larval killing. Our data suggest that HDM allergic sensitization drives a response that mimics a primary Ascaris infection, such that CD4+ Th2-mediated eosinophil-dependent helminth larval killing in the lung tissue occurs. This study provides insight into the mechanisms underlying tissue-specific responses that drive a protective response against the early stages of the helminths prior to their establishing long-lasting infections in the host. 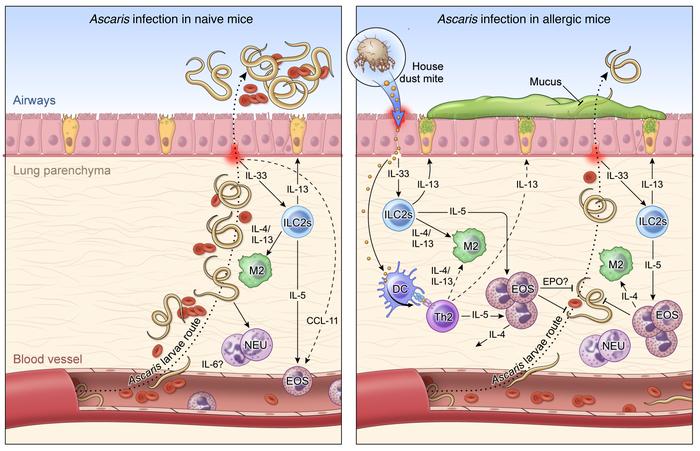 Left: In a primary exposure to parasites, after penetrating the intestine at the level of the cecum or proximal colon, the infective L3-stage larvae migrate through the portal vessels to the liver and subsequently to the lungs in their quest to reach the airways. Once in the lungs they migrate through the parenchyma, leading to a marked influx of neutrophils and correlated levels of IL-6, and penetrate into the alveolar spaces, causing bleeding and mechanical damage in the organ. These migrating larvae, while growing in size toward the molting to L4 stages of biological development, induce a local inflammatory response in the lungs with a signature type 2 response, initially by early IL-5 levels, and later by IL-4 and IL-13 levels, culminating in the differentiation of M2 macrophages and eosinophilia in the tissue. However, this robust type 2 response is only fully mounted when most of the larvae have reached the airways, allowing the establishment of a chronic and long-standing infection. Right: HDM allergic sensitization prior to infection with induces a robust Th2-dominated inflammatory response in the lung characterized by an increase in both IL-5/IL-13–producing type 2 innate lymphoid cells (ILC2s) and eosinophils. This allergen-driven inflammation in the lungs leads to an IL-4– and IL-13–rich environment that drives the differentiation of lung macrophages toward the M2 phenotype expressing arginase-1. When the larvae migrate from the circulation to the lung tissue and airways in this HDM-sensitized environment, they encounter an eosinophil-dominated type 2 response, which leads to a 70% reduction in the number of lung-stage larvae and a profound larval developmental arrest, allowing the reduction of intensity and burden of disease, inducing lower bleeding and mechanical damage in the tissue during their migration.