Intrinsically disordered proteins (IDPs) are emerging as attractive drug targets by virtue of their prevalence in various diseases including cancer. Drug development targeting IDPs is challenging because IDPs have dynamic structure features and conventional drug design is not applicable. NUPR1 is an IDP that plays an important role in pancreatic cancer. We previously reported that trifluoperazine (TFP), an antipsychotic agent, was capable of binding to NUPR1 and inhibiting tumor growth. Unfortunately, TFP showed strong central nervous system side effects. In the present work, we undertook a multidisciplinary approach to optimize TFP based on the synergy of computer modeling, chemical synthesis, and a variety of biophysical, biochemical, and biological evaluations. A family of TFP-derived compounds was produced and the most active one, ZZW-115, showed a dose-dependent tumor regression with no neurological effects and an ability to induce cell death mainly by necroptosis. This study opens a new perspective for drug development against IDPs, demonstrating the possibility of successful ligand-based drug design for such challenging targets.

ZZW-115 treatment induces a decrease in ATP production and induces a ROS overproduction. 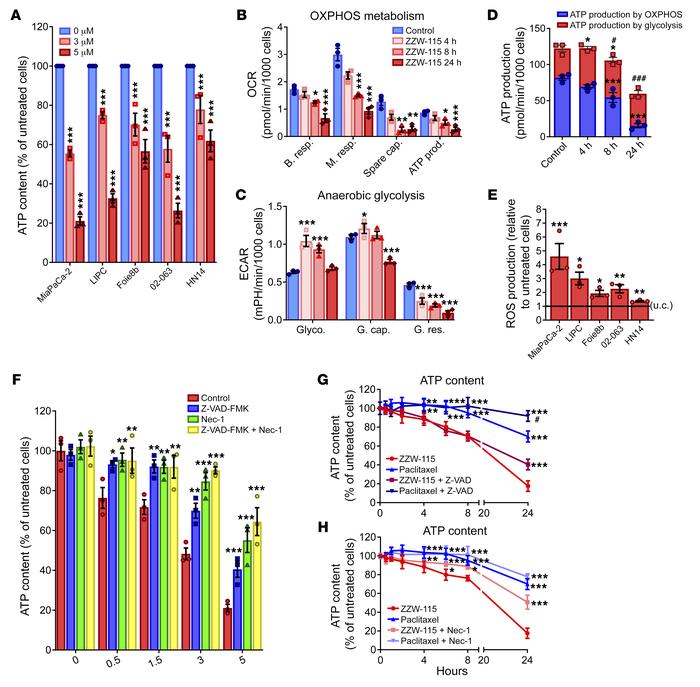