The etiology of severe hemolytic anemia in most patients with recessive hereditary spherocytosis (rHS) and the related disorder hereditary pyropoikilocytosis (HPP) is unknown. Whole-exome sequencing of DNA from probands of 24 rHS or HPP kindreds identified numerous mutations in erythrocyte membrane α-spectrin (SPTA1). Twenty-eight mutations were novel, with null alleles frequently found in trans to missense mutations. No mutations were identified in a third of SPTA1 alleles (17/48). WGS revealed linkage disequilibrium between the common rHS-linked αBH polymorphism and a rare intron 30 variant in all 17 mutation-negative alleles. In vitro minigene studies and in vivo splicing analyses revealed the intron 30 variant changes a weak alternate branch point (BP) to a strong BP. This change leads to increased utilization of an alternate 3′ splice acceptor site, perturbing normal α-spectrin mRNA splicing and creating an elongated mRNA transcript. In vivo mRNA stability studies revealed the newly created termination codon in the elongated transcript activates nonsense-mediated decay leading to spectrin deficiency. These results demonstrate that a unique mechanism of human genetic disease contributes to the etiology of a third of rHS cases, facilitating diagnosis and treatment of severe anemia and identifying a new target for therapeutic manipulation.

Haplotyping at the SPTA1 locus. 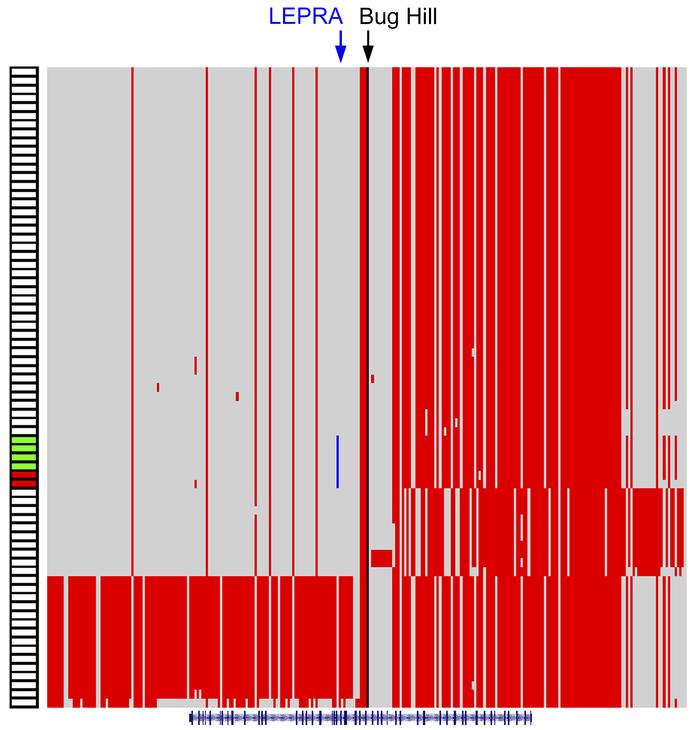 Haplotype analysis around the locus of all 71 alleles with the αBH variant, Ala970Asp, in the 1000 Genomes 2015 database and 2 rHS patients heterozygous for the αBH variant. The αBH allele is denoted in black and the rare intron 30 variant, the αLEPRA allele, is denoted in blue. The HG19 reference sequence is denoted in gray and the nonreference sequence is shown in red. The gene is shown at the bottom. The 4 individuals in the 2015 1000 Genomes database and both rHS patients who carry the αLEPRA allele are shown in green and red, respectively.