Inflammatory destruction of iron-rich myelin is characteristic of multiple sclerosis (MS). Although iron is needed for oligodendrocytes to produce myelin during development, its deposition has also been linked to neurodegeneration and inflammation, including in MS. We report perivascular iron deposition in multiple sclerosis lesions that was mirrored in 72 lesions from 13 marmosets with experimental autoimmune encephalomyelitis. Iron accumulated mainly inside microglia/macrophages from 6 weeks after demyelination. Consistently, expression of transferrin receptor, the brain’s main iron-influx protein, increased as lesions aged. Iron was uncorrelated with inflammation and postdated initial demyelination, suggesting that iron is not directly pathogenic. Iron homeostasis was at least partially restored in remyelinated, but not persistently demyelinated, lesions. Taken together, our results suggest that iron accumulation in the weeks after inflammatory demyelination may contribute to lesion repair rather than inflammatory demyelination per se.

Iron accumulation is not associated with inflammation. 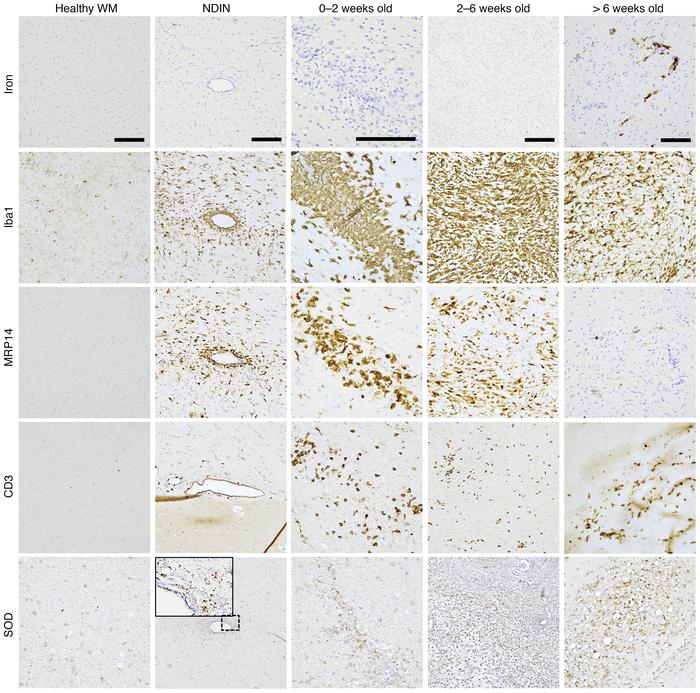 Iba1+ microglia/macrophages, MRP14+ early-activated peripheral macrophages, and CD3+ T cells, as well as superoxide dismutase (SOD, a marker for oxidative stress), are present from the earliest stage of lesion development (nondemyelinated inflammatory nodules [NDIN]), whereas iron accumulation only begins once lesions are 6 weeks old. Note that most Iba1+ microglia/macrophages do not contain iron, even in lesions older than 6 weeks. Scale bars: 100 μm. Counterstain: hematoxylin. Lesions selected from marmosets 6, 7, 9, and 10. Note that the lesion shown on the top row, second column, is the same lesion shown in (top row, second column).