To investigate the possibility that HIV-1 replication in lymph nodes sustains the reservoir during antiretroviral therapy (ART), we looked for evidence of viral replication in 5 donors after up to 13 years of viral suppression. We characterized proviral populations in lymph nodes and peripheral blood before and during ART, evaluated the levels of viral RNA expression in single lymph node and blood cells, and characterized the proviral integration sites in paired lymph node and blood samples. Proviruses with identical sequences, identical integration sites, and similar levels of RNA expression were found in lymph nodes and blood samples collected during ART, and no single sequence with significant divergence from the pretherapy population was detected in either blood or lymph nodes. These findings show that all detectable persistent HIV-1 infection is consistent with maintenance in lymph nodes by clonal proliferation of cells infected before ART and not by ongoing viral replication during ART. 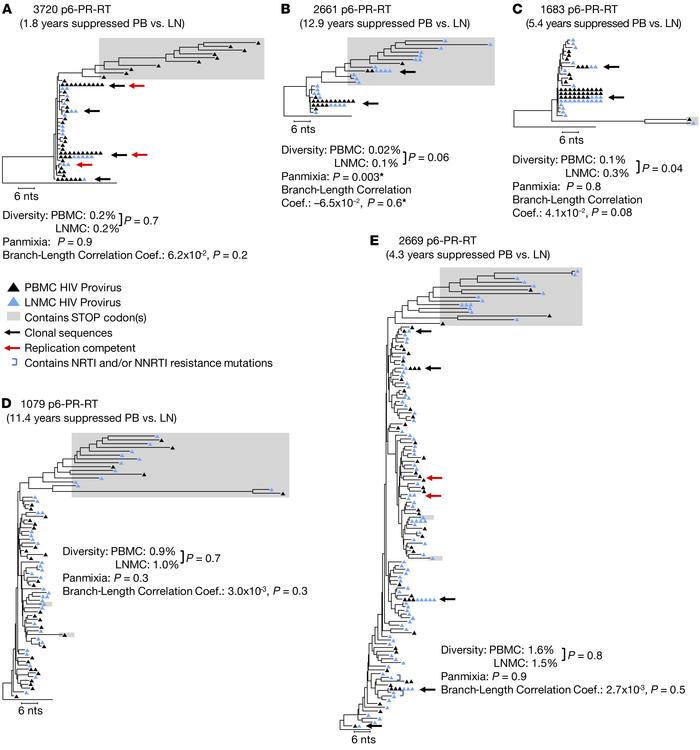 Neighbor joining trees were constructed from single-genome P6-PR-RT proviral sequences obtained from PBMCs (black triangles) and LNMCs (blue triangles) after 1.8–12.9 years of continuous viral suppression on ART. Diversity, divergence, and root-to-tip distances were measured as described in the legend to . Branch-length correlation coefficients were calculated from maximum likelihood trees, and significance was assessed by a permutation test as described in Methods. Black arrows indicate identical sequences that were found in both locations. The presence of identical viral sequences in both locations is likely due to clonal expansion of HIV-1–infected cells. Red arrows indicate sequences that matched virus recovered in the viral outgrowth assay. is rooted on the HIV-1 subtype C consensus sequence; – are rooted on the HIV-1 subtype B consensus sequence. Sequences containing G to A hypermutation and/or stop codons in open reading frames (indicated by shaded boxes) were excluded from all analyses. Except where indicated (*), rakes of identical sequences were collapsed to a single variant for the test for panmixia and branch-length analysis. Results from a total of 10 samples (2 samples each from 5 patients) are represented in this figure.