Vascular development in the mammalian retina is a paradigm for CNS vascular development in general, and its study is revealing fundamental mechanisms that explain the efficacy of antiangiogenic therapies in retinal vascular disease. During development of the mammalian retina, hypoxic astrocytes are hypothesized to secrete VEGF, which attracts growing endothelial cells as they migrate radially from the optic disc. However, published tests of this model using astrocyte-specific deletion of Vegf in the developing mouse retina appear to contradict this theory. Here, we report that selectively eliminating Vegf in neonatal retinal astrocytes with a Gfap-Cre line that recombines with approximately 100% efficiency had no effect on proliferation or radial migration of astrocytes, but completely blocked radial migration of endothelial cells, strongly supporting the hypoxic astrocyte model. Using additional Cre driver lines, we found evidence for essential and partially redundant actions of retina-derived (paracrine) and astrocyte-derived (autocrine) VEGF in controlling astrocyte proliferation and migration. We also extended previous studies by showing that HIF-1α in retinal neurons and HIF-2α in Müller glia play distinct roles in retinal vascular development and disease, adding to a growing body of data that point to the specialization of these 2 hypoxia-sensing transcription factors.

Contrasting responses of gene expression and astrocyte proliferation/migration with loss of in astrocytes versus all retinal cells. 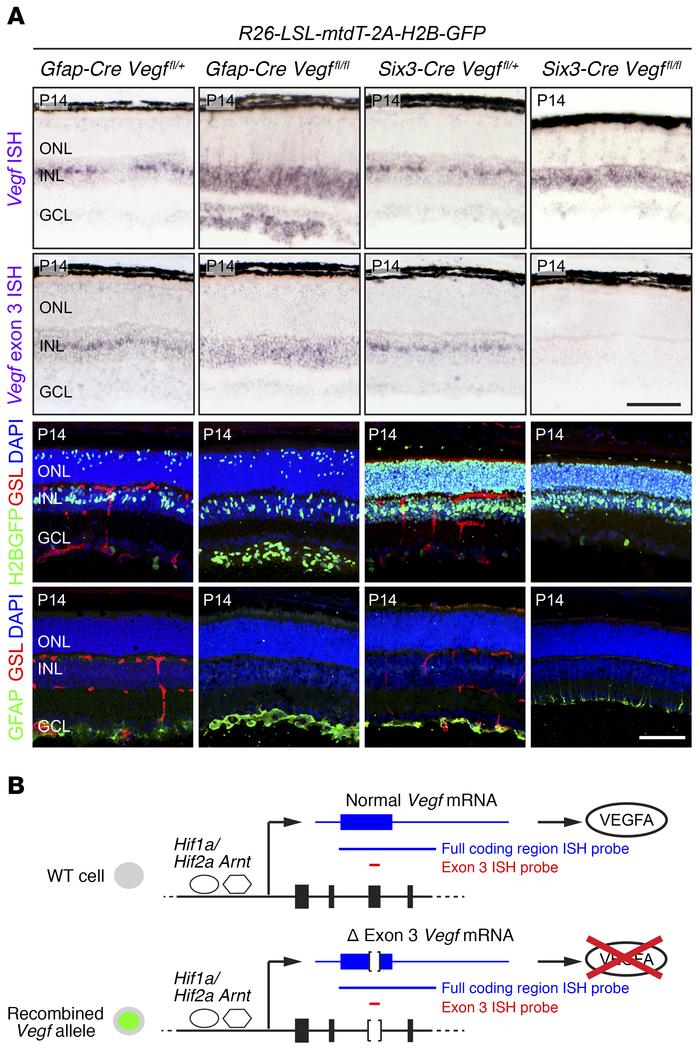 () Retina sections at P14 from mice carrying the reporter, or drivers, and the indicated combinations of alleles. Top 2 rows show ISH for transcripts. First row, ISH with the full coding region probe detects transcripts from both the unrecombined and the recombined conditional allele. Second row, ISH with the exon 3–specific probe detects only unrecombined transcripts. Third row, localization of activity visualized with the reporter, leading to production of H2B-GFP. Fourth row, astrocytes visualized with GFAP immunostaining. Retinal vasculature, visualized with GSL staining, is missing from and retinas. Scale bars: 100 μm. () HIF-stimulated transcription of the WT (top) and KO (i.e., exon 3 deleted; bottom) alleles in hypoxic cells and the structures of WT and exon 3–deleted transcripts. In the diagram of the gene, the first 4 exons are shown as black rectangles. The full coding region ISH probe is shown as a blue line and the exon 3–specific ISH probe is shown as a red line.