Combined germline and somatic second-hit inactivating mutations of the RASA1 gene, which encodes a negative regulator of the Ras signaling pathway, cause blood and lymphatic vascular lesions in the human autosomal-dominant vascular disorder capillary malformation–arteriovenous malformation (CM-AVM). How RASA1 mutations in endothelial cells (ECs) result in vascular lesions in CM-AVM is unknown. Here, using different murine models of RASA1 deficiency, we found that RASA1 was essential for the survival of ECs during developmental angiogenesis, in which primitive vascular plexuses are remodeled into hierarchical vascular networks. RASA1 was required for EC survival during developmental angiogenesis, because it was necessary for export of collagen IV from ECs and deposition in vascular basement membranes. In the absence of RASA1, dysregulated Ras/MAPK signal transduction in ECs resulted in impaired folding of collagen IV and its retention in the endoplasmic reticulum (ER), leading to EC death. Remarkably, the chemical chaperone 4-phenylbutyric acid and small-molecule inhibitors of MAPK and 2-oxoglutarate–dependent collagen IV–modifying enzymes rescued ER retention of collagen IV and EC apoptosis and resulted in normal developmental angiogenesis. These findings have important implications for a better understanding of the molecular pathogenesis of CM-AVM and possible means of treatment. 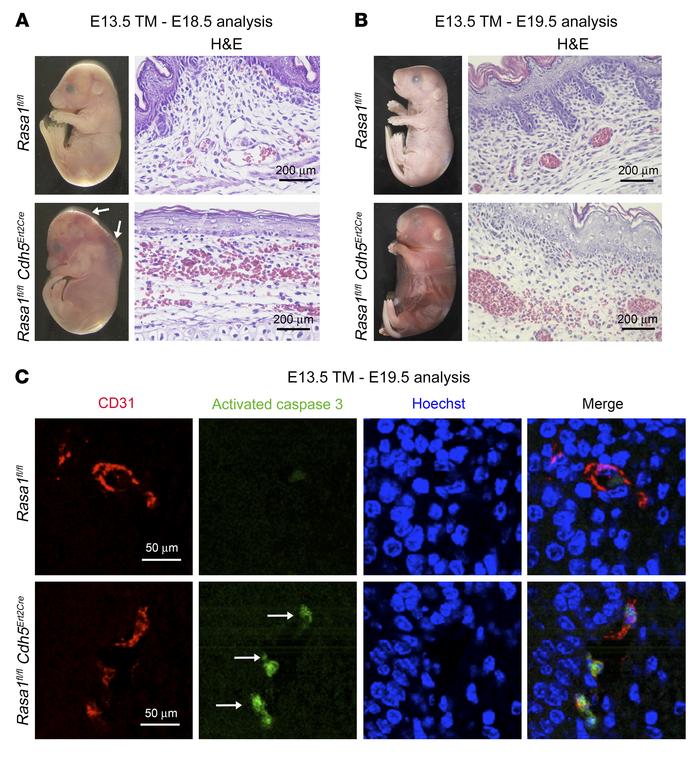 TM was administered to littermate and embryos at E13.5. ( and ) Embryos were harvested at E18.5 or E19.5, and skin sections were stained with H&E. Note the localized hemorrhage in embryos at E18.5 (arrows) and the more extensive hemorrhage and edema at E19.5. Note the extravasated erythrocytes in skin sections from E18.5 and E19.5 embryos. The section from the E18.5 embryo is from an area of skin with visible hemorrhage. Scale bars: 200 μm. () Embryos were harvested at E19.5, and skin sections were stained with Hoechst and antibodies against CD31 and activated caspase 3. Note the apoptotic BECs in embryos (arrows). Scale bars: 50 μm.