Kaposi’s sarcoma–associated (KS-associated) herpesvirus (KSHV) is a B-lymphotropic agent linked to AIDS-related lymphoproliferative disorders and KS. We and others have earlier identified two viral genes, K3 and K5, that encode endoplasmic reticulum proteins that downregulate surface MHC-I chains by enhancing their endocytosis. Here we have examined the ability of these proteins to influence the disposition of other host surface proteins implicated in immune recognition and activation. We report that K5, but not K3, expression in BJAB cells dramatically reduces ICAM-1 and B7-2 surface expression; B7-1 expression is unaffected. This K5-induced reduction can be reversed by coexpression of a dominant negative mutant of dynamin, indicating that the loss of ICAM and B7-2 surface expression is due to their enhanced endocytosis. This downregulation is functionally significant, because K5-transfected B cells show substantial impairment in their ability to induce T cell activation. K5 is thus the first example of a viral modulator of immunological synapse formation and T cell costimulation. We propose that its expression reduces T cell responses to KSHV-infected B cells early in infection, thereby diminishing antiviral cytokine release and the production of stimulatory signals for CTL generation. 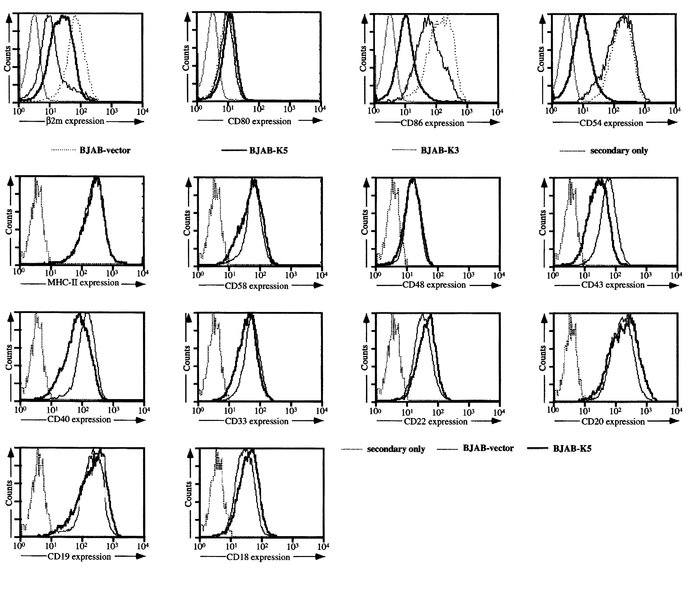