Lactation induces bone loss to provide sufficient calcium in the milk, a process that involves osteoclastic bone resorption but also osteocytes and perilacunar resorption. The exact mechanisms by which osteocytes contribute to bone loss remain elusive. Osteocytes express genes required in osteoclasts for bone resorption, including cathepsin K (Ctsk), and lactation elevates their expression. We show that Ctsk deletion in osteocytes prevented the increase in osteocyte lacunar area seen during lactation, as well as the effects of lactation to increase osteoclast numbers and decrease trabecular bone volume, cortical thickness, and mechanical properties. In addition, we show that Ctsk deletion in osteocytes increased bone parathyroid hormone–related peptide (PTHrP) and prevented the decrease in serum parathyroid hormone (PTH) induced by lactation, but amplified the increase in serum 1,25-dyhydroxyvitamin D [1,25(OH)2D]. The net result of these changes is to maintain serum and milk calcium levels in the normal range, ensuring normal offspring skeletal development. Our studies confirm the fundamental role of osteocytic perilacunar remodeling in physiological states of lactation and provide genetic evidence that osteocyte-derived Ctsk contributes not only to osteocyte perilacunar remodeling, but also to the regulation of PTH, PTHrP, 1,25(OH)2D, osteoclastogenesis, and bone loss in response to the high calcium demand associated with lactation.

Schematic representation of the relationship between osteocytic osteolysis, bone remodeling, and calcium metabolism during lactation in mice in the presence or absence of Ctsk in osteocytes. 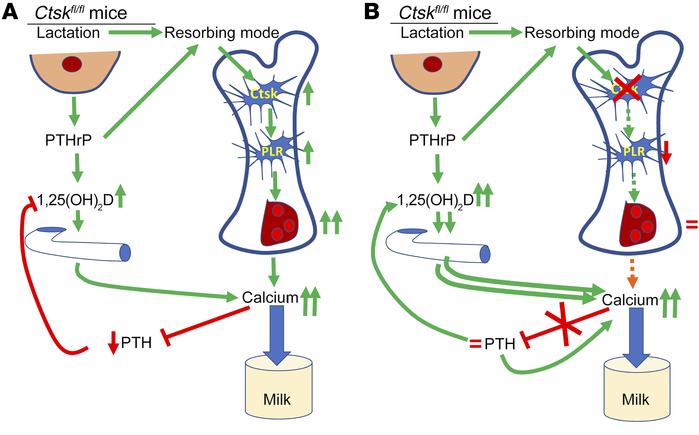 () In the presence of Ctsk in osteocytes (control lactating mice), the changes induced by the lactating mammary gland, including increased secretion of PTHrP, switch the osteocytes to the resorbing mode, increasing TRAP activity and expression and leading to increased perilacunar resorption (PLR) and lacunar enlargement. These changes in the osteocyte microenvironment lead to an increase in PTHrP and the ratio, thereby increasing osteoclastogenesis, bone resorption, and serum calcium. This increase in serum calcium is also secondary to higher PTHrP and 1,25(OH)2D acting on the kidney and the gut, resulting in both calcium supply to the milk and repression of endogenous PTH secretion. () In the absence of Ctsk in osteocytes ( lactating mice), although the changes induced in the mammary gland by lactation increase TRAP activity and in osteocytes, deletion of prevents PLR, enlargement of the lacuna, and an increase in the ratio and osteoclastogenesis. The lack of osteocytic osteolysis and osteoclastogenesis limits the supply of calcium to serum; this is sensed by the parathyroid gland, which continues to secrete PTH at prelactation levels and, together with PTHrP, enhances 1,25(OH)2D levels and thus calcium absorption from the gut, compensating for the limited supply of calcium coming from bone and ensuring appropriate calcium levels in the blood and milk.