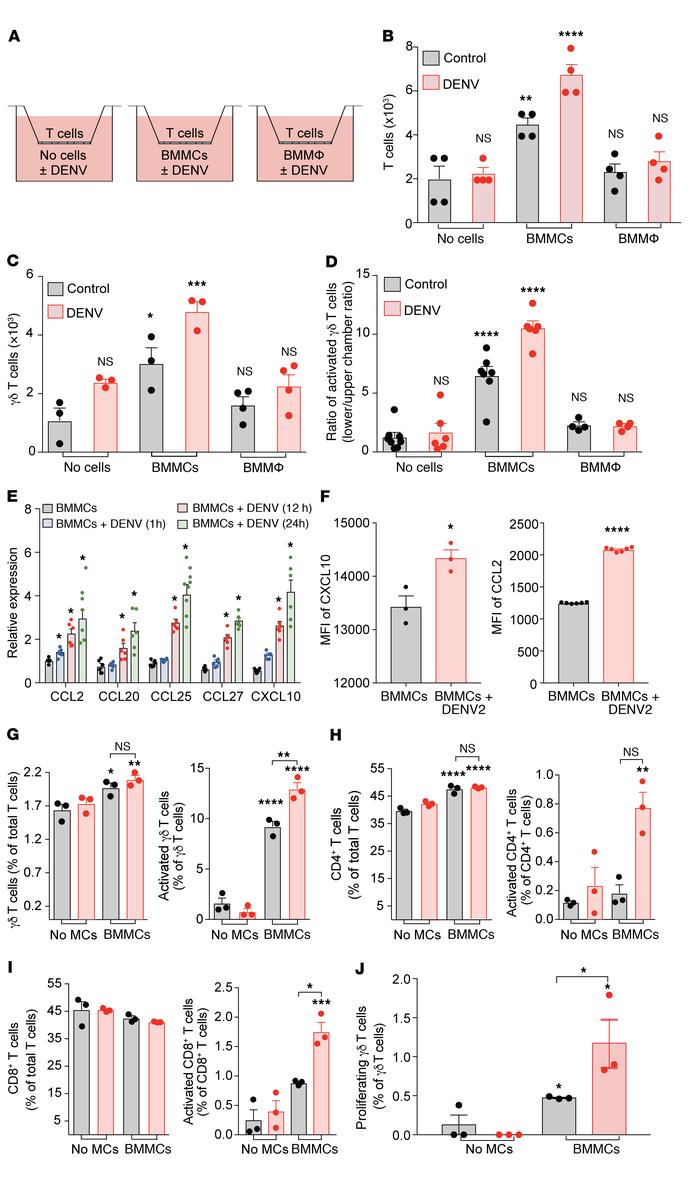 () Schematic showing the initial cell locations and conditions for the Transwell assay for –. BMMCs or BMMΦ were infected with DENV in the lower chamber, and T cells ( = 3 mice) were added to the top chamber to analyze migration and activation of T cell subsets across the Transwell. () Significantly higher numbers of T cells migrated to the bottom chamber containing DENV2-stimulated MCs but not DENV2-infected BMMΦ. () Among the T cells that migrated to the lower chamber, the γδ T cell subset was enriched in a MC-dependent manner. () The ratio of activated γδ T cells (CD3+γδTCR+CD69+) in the lower versus upper chambers showed a significant increase in response to DENV2-stimulated MCs. () DENV2-stimulated expression of γδ T cell chemoattractants in MCs. () Intracellular staining for chemokines showed increased CXCL10 and CCL2 production by DENV-treated MCs 24 hours after challenge with DENV, as measured by flow cytometry. (–) Isolated T cells were cultured with BMMCs in the presence or absence of DENV to assess MC-dependent and DENV-dependent activation and proliferation. Cells were stained for CD3, CD4, CD8, CD69, and the γδ TCR and analyzed by flow cytometry after 96 hours of coculture. The percentages of total and activated () γδ, () CD4+, and () CD8+ T cells were compared. () T cells were labeled with CFSE prior to coculturing with BMMCs, and the percentage of proliferating γδ T cells was measured by flow cytometry. Representative flow cytometric plots are shown in . Data represent the mean ± SEM. * < 0.05, ** < 0.01, *** < 0.001, and **** < 0.0001, by 2-way ANOVA with Tukey’s post test (–), Student’s unpaired, 2-tailed test (), and 1-way ANOVA with Tukey’s post test (–).