Idiopathic pulmonary fibrosis (IPF) is a deadly disease with a poor prognosis and few treatment options. Pathological remodeling of the extracellular matrix (ECM) is a key factor that drives the disease pathogenesis, although the underlying mechanisms remain unknown. Alternative polyadenylation (APA) has recently been shown to play a major role in cellular responses to stress by driving the expression of fibrotic factors through the alteration of miRNA sensitivity, but a connection to IPF has not been established. Here, we demonstrated that CFIm25, a global regulator of APA, was downregulated in the lungs of patients with IPF and mice with pulmonary fibrosis, with its expression selectively reduced in α–smooth muscle actin–positive (α-SMA–positive) fibroblasts. Following CFIm25 knockdown in healthy human lung fibroblasts, we identified 808 genes with shortened 3′-UTRs, including those involved in the TGF-β signaling pathway, the Wnt signaling pathway, and cancer pathways. The expression of key profibrotic factors was suppressed by CFIm25 overexpression in IPF fibroblasts. Finally, we demonstrated that deletion of CFIm25 in fibroblasts or myofibroblast precursors using either the Col1a1 or the Foxd1 promoter enhanced pulmonary fibrosis after bleomycin exposure. Collectively, our results identified CFIm25 downregulation as an important mechanism for elevating profibrotic gene expression in pulmonary fibrosis. 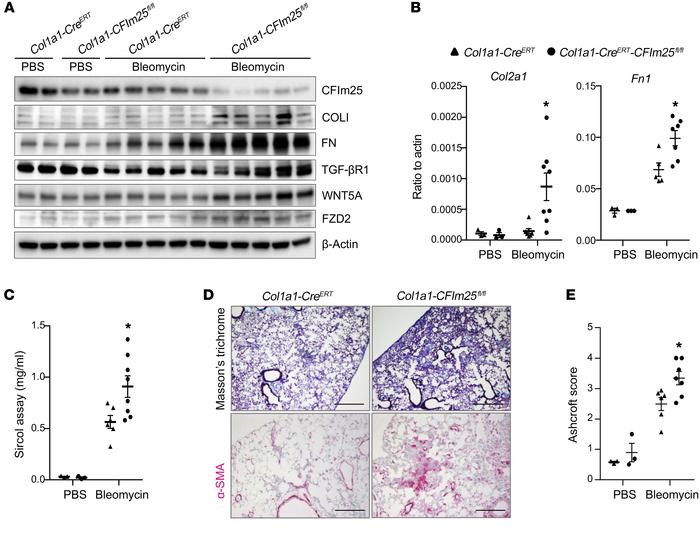 Four- to six-week-old mice and age- and sex-matched littermate controls were administrated 75 mg/kg tamoxifen (i.p.) daily for 5 days to induce Cre expression. After 1 week, the mice were injected with PBS or bleomycin biweekly for 4 weeks. Lungs were collected for analysis 28 days after the first bleomycin injection. () Western blot shows CFIm25, COL1, and FN expression in the lungs of control and mice. Pulmonary fibrosis was analyzed using a Sircol assay (), qRT-PCR (), Masson’s trichrome and α-SMA staining (), and an Ashcroft assay (). * < 0.05, by 1-way ANOVA followed by Bonferroni’s multiple comparisons test versus mice treated with bleomycin. > 4 biological replicates.