While T cells are important for the pathogenesis of systemic lupus erythematosus (SLE) and lupus nephritis, little is known about how T cells function after infiltrating the kidney. The current paradigm suggests that kidney-infiltrating T cells (KITs) are activated effector cells contributing to tissue damage and ultimately organ failure. Herein, we demonstrate that the majority of CD4+ and CD8+ KITs in 3 murine lupus models are not effector cells, as hypothesized, but rather express multiple inhibitory receptors and are highly dysfunctional, with reduced cytokine production and proliferative capacity. In other systems, this hypofunctional profile is linked directly to metabolic and specifically mitochondrial dysfunction, which we also observed in KITs. The T cell phenotype was driven by the expression of an “exhausted” transcriptional signature. Our data thus reveal that the tissue parenchyma has the capability of suppressing T cell responses and limiting damage to self. These findings suggest avenues for the treatment of autoimmunity based on selectively exploiting the exhausted phenotype of tissue-infiltrating T cells.

The transcriptional profile of KITs is consistent with T cell exhaustion. 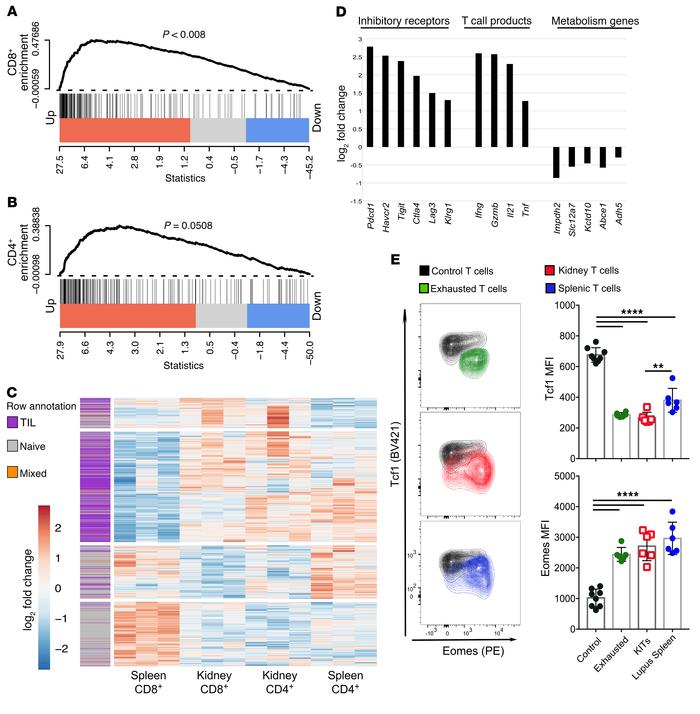