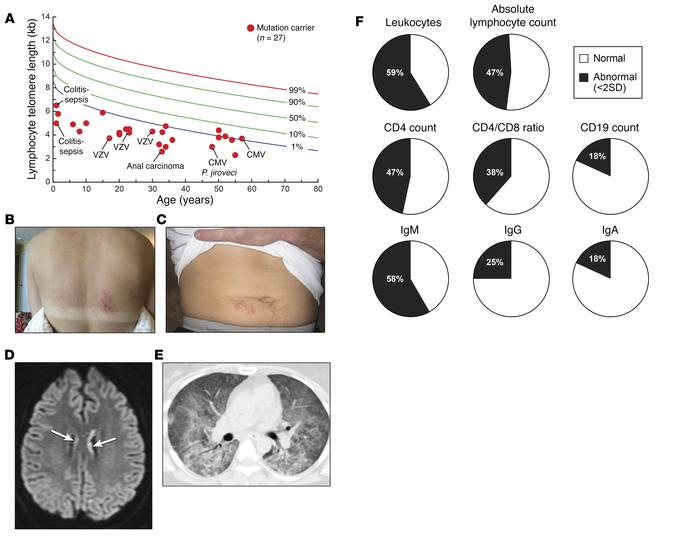 () Telogram showing total lymphocyte TL measured by flow cytometry and FISH of mutation carriers relative to a nomogram of healthy controls. Those who developed opportunistic infections are noted. One mutation carrier (patient 4, ) did not have TL measured, so only 27 of 28 patients studied are plotted. ( and ) Images showing vesicular rash characteristic of VZV reaction (patients 3 and 5 in , respectively). () Brain MRI showing evidence of enhancing periventricular flare (marked by arrows) in a 19-year-old who died from fatal CMV encephalitis (, patient 4). () Chest CT scan image from a patient who developed concurrent . pneumonia that was complicated secondarily by CMV pneumonitis; the latter was treatment refractory and ultimately fatal. () Proportion of telomerase mutation carriers with lymphocyte count abnormalities (defined as at least 2 SD below the age-adjusted mean). Low CD4 counts and low IgM levels were the most common anomalies. Data are derived from 17 patients, including 7 from for whom the full immune evaluation was available.