BACKGROUND. Awake neurosurgery requires patients to converse and respond to visual or verbal prompts to identify and protect brain tissue supporting essential functions such as language, primary sensory modalities, and motor function. These procedures can be poorly tolerated because of patient anxiety, yet acute anxiolytic medications typically cause sedation and impair cortical function. METHODS. In this study, direct electrical stimulation of the left dorsal anterior cingulum bundle was discovered to reliably evoke positive affect and anxiolysis without sedation in a patient with epilepsy undergoing research testing during standard inpatient intracranial electrode monitoring. These effects were quantified using subjective and objective behavioral measures, and stimulation was found to evoke robust changes in local and distant neural activity. RESULTS. The index patient ultimately required an awake craniotomy procedure to confirm safe resection margins in the treatment of her epilepsy. During the procedure, cingulum bundle stimulation enhanced positive affect and reduced the patient’s anxiety to the point that intravenous anesthetic/anxiolytic medications were discontinued and cognitive testing was completed. Behavioral responses were subsequently replicated in 2 patients with anatomically similar electrode placements localized to an approximately 1-cm span along the anterior dorsal cingulum bundle above genu of the corpus callosum. CONCLUSIONS. The current study demonstrates a robust anxiolytic response to cingulum bundle stimulation in 3 patients with epilepsy. TRIAL REGISTRATION. The current study was not affiliated with any formal clinical trial. FUNDING. This project was supported by the American Foundation for Suicide Prevention and the NIH.

Intraoperative timeline, photographs, and impact of stimulation on tolerance of awake brain surgery in the index patient. 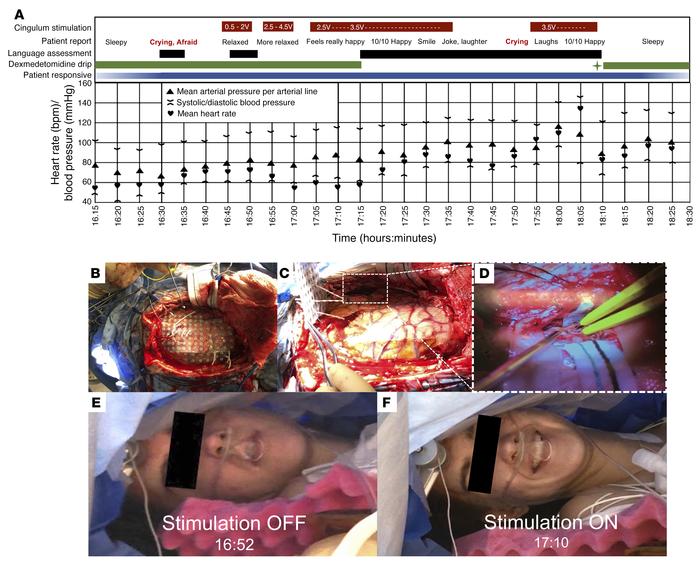 () Chart shows the timing of the intraoperative interventions, and observations are indicated in the color bars at the top; periodic measurements of heart rate and blood pressure are reported in the lower grid. Initially, continued dexmedetomidine (a sedative-anxiolytic agent) infusion alone was associated with periods of both sedation and anxiety, which confounded the initial language assessment. As cingulum stimulation was titrated up to maintain anxiolysis, dexmedetomidine was ultimately discontinued completely, and language assessments were performed successfully. For a period during awake surgery, cingulum stimulation was discontinued as well, resulting in recurrent anxiety, but this was again immediately alleviated by resuming stimulation. After the completion of the language assessment, a bolus of propofol (sedative anesthetic) was administered (green star), dexmedetomidine was reinitiated, and cingulum stimulation was discontinued. All intraoperative stimulation was voltage-controlled at 130-Hz frequency, 300-μs pulse width and was delivered in a bipolar, biphasic, and charge-balanced manner. Blood oxygenation remained at 100%, and other vital signs were stable throughout the procedure. (–) Intraoperative images show the spatial extent of the grid coverage with 1-cm-spaced electrode contacts over the left lateral surface of the brain (), the appearance of the brain after lifting off a grid array with depth electrodes, with an inset (dotted white rectangle) focused on the location of the resection (), and a magnified view of the location of the resection in the posterior inferior and middle temporal gyri (). For size reference in , electrocorticography grid contacts are spaced at 1-cm intervals, and for size reference in , the white surgical cotton strip pointing into the surgical field is 0.5 in. wide. The patient is positioned laterally, with the head parallel to the floor and left side up, creating a space to examine her beneath the surgical drape. Intraoperative images of her face without stimulation () and with anxiolytic stimulation (), showing a characteristic smile.