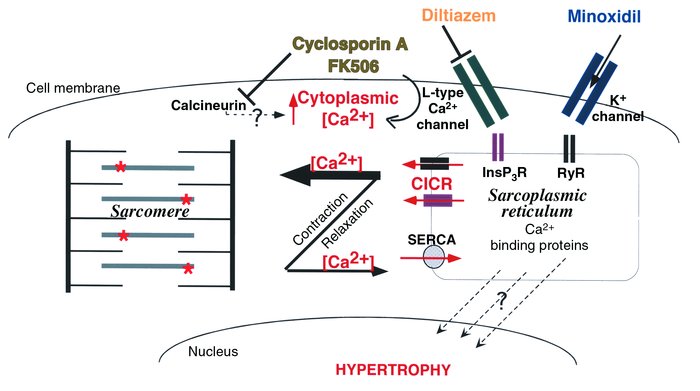 The pathway leading from sarcomere protein gene mutation to hypertrophic cardiomyopathy and the role of an abnormal Ca2+ response. CsA and FK506 may increase cytoplasmic Ca2+ through interaction with calcineurin or by activation of the -type Ca2+ channel. Cytoplasmic Ca2+ enters the sarcoplasmic reticulum by way of an ATPase-dependent calcium pump (SERCA) and exits by way of the inositol triphosphate receptor (InsP3R) and the ryanodine receptor (RyR). Small increases in Ca2+ trigger Ca2+-induced Ca2+ release (CICR) primarily through the RyR. Considerable Ca2+ is stored in the sarcomere. We hypothesize that sarcomeres containing mutant myosins (denoted by asterisks) store more Ca2+ than normal sarcomeres, causing a reduction in sarcoplasmic reticulum Ca2+ that signals a hypertrophic response. Most Ca2+ in the sarcomere and sarcoplasmic reticulum is bound to carrier proteins, whereas most Ca2+ in the cytoplasm is free. Diltiazem is an inhibitor of the -type Ca2+ channel, whereas minoxidil is an activator of the K+ channel.