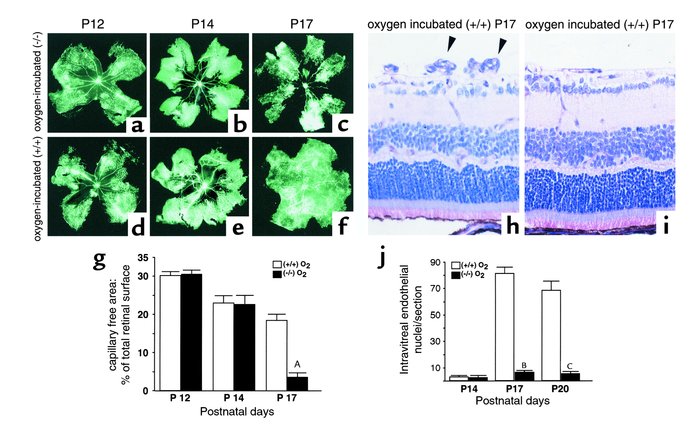 Quantification of ischemic retina (–) and intravitreal neovascularization (–). () Capillary-free area as a percentage of total retinal surface in FITC-dextran–perfused retinae of oxygen-incubated mice (–) and (–) mice at different stages. On P12, no difference in the size of the capillary-free area in () and () mice is detectable. Nor is there any significant difference at P14 after 48 hours of hypoxia ( [], []). At P17, retinal flat-mounts of oxygen-incubated mice () reveal a significant reduction in the size of the central capillary-free area and a relatively normal vascular morphology compared with retinae of oxygen-incubated mice (). A < 0.0001; = 6. Picture side length – = 5.150 mm. () Intravitreal neovascularization quantified by endothelial cell nucleus count on serial sections. On P14, a weak equivalent neovascular response is detected in and oxygen-exposed mice ( = 5). At P17, the intravitreal neovascularization is significantly stronger in the mice (, arrowheads) compared with mice (). B < 0.0001; = 10. Counts at P20 reveal a similar difference (C < 0.0001; = 5). Picture side width (, ) = 220 μm.