Sodium-Independent Active Potassium Reabsorption in Proximal Tubule of the Dog

Prior studies of proximal tubule reabsorption have failed to distinguish conclusively between a separate active K+ transport system and K+ movement linked to Na+ reabsorption. To attempt to dissociate movement of K+ from Na+ and Ca++, recollection micropuncture experiments were performed in proximal tubules of intact and thyroparathyroidectomized (TPTX) dogs under two different conditions known to inhibit Na+ reabsorption: saline expansion to 5% body wt, and 5 mg/kg acetazolamide. A control hydropenic group was also studied. Tubular concentrations of K+, Na+, and Ca++ were measured by electron probe analysis. During initial collections, mean±SEM tubular fluid/plasma (TF/P)K+ was 1.07 ±0.05, 1.05±0.05, and 1.00±0.03 in intact hydropenic (n = 7), saline (n = 6), and acetazolamide (n = 8) groups; fractional reabsorption (FR) of K+ in proximal tubules was 0.35, 0.39, and 0.31 respectively. After saline, (TF/P)Inul in fell from 1.81 to 1.34 (P < 0.01); (TF/P)K+, (TF/P)Na+, and tubular fluid/ultrafiltrate, (TF/UF)Ca++ did not change, so that FR of all three ions fell proportionately. After acetazolamide, however, despite a 24% inhibition of FR of Na+ and Ca++, (TF/P)K+ fell to 0.85±0.04 (P < 0.005) so that FR of K+ was unchanged at 0.34.

A separate uphill transport system for K+ in proximal tubules is therefore unmasked by acetazolamide, a drug which selectively inhibits Na+ (and Ca++) reabsorption. Saline, on the other hand, inhibits net reabsorption of all three ions, probably by increasing passive backflux via intercellular channels. 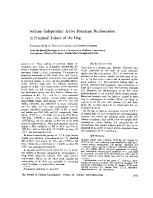 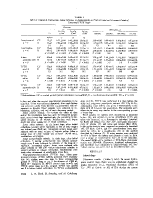 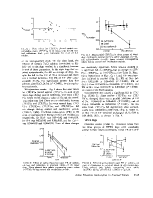 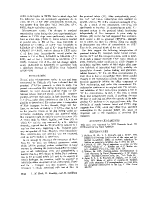 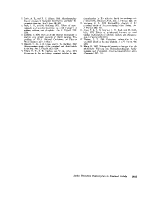