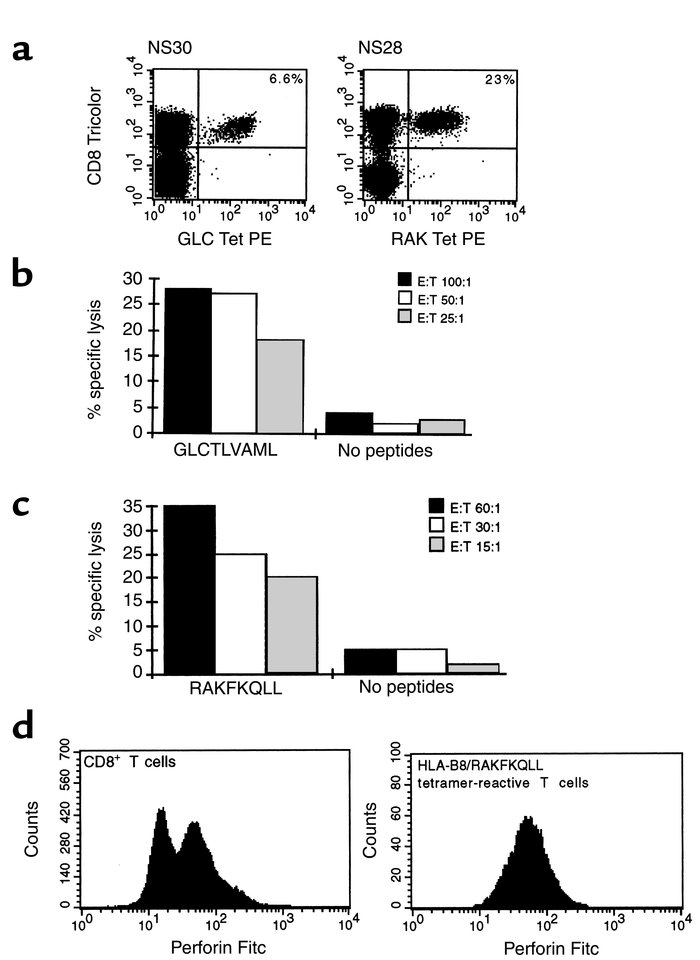 Cytotoxicity of EBV-specific T cells during the primary immune response. () PBMCs from donor NS30, an HLA-A2+ individual with IM, and donor NS28, an HLA-B8+ individual with IM, were stained with an A2/GLCTLVAML or a B8/RAKFKQLL tetrameric complex and with an anti-CD8 mAb. The frequency (%) of CD8+ T cells that stain with the tetrameric complex is shown. PBMCs from these two patients were used as effector cells in chromium-release assays. PBMCs from donor NS30 caused specific lysis of target cells prepulsed with the GLCTLVAML peptide (), and PBMCs from donor NS28 caused specific lysis of the targets prepulsed with the RAKFKQLL peptide (). PBMCs from the HLA-B8+ donor were stained with the B8/RAKFKQLL tetrameric complex, with anti-CD8, and then were fixed, permeabilized, and stained for intracellular perforin expression. Perforin expression on CD8+ T cells was bimodal with 57% of CD8+ T cells being perforin bright. All the HLA-B8/RAKFKQLL tetramer–reactive T cells were perforin bright. The FL-1 threshold was set using a FITC-conjugated IgG2b control mAb.