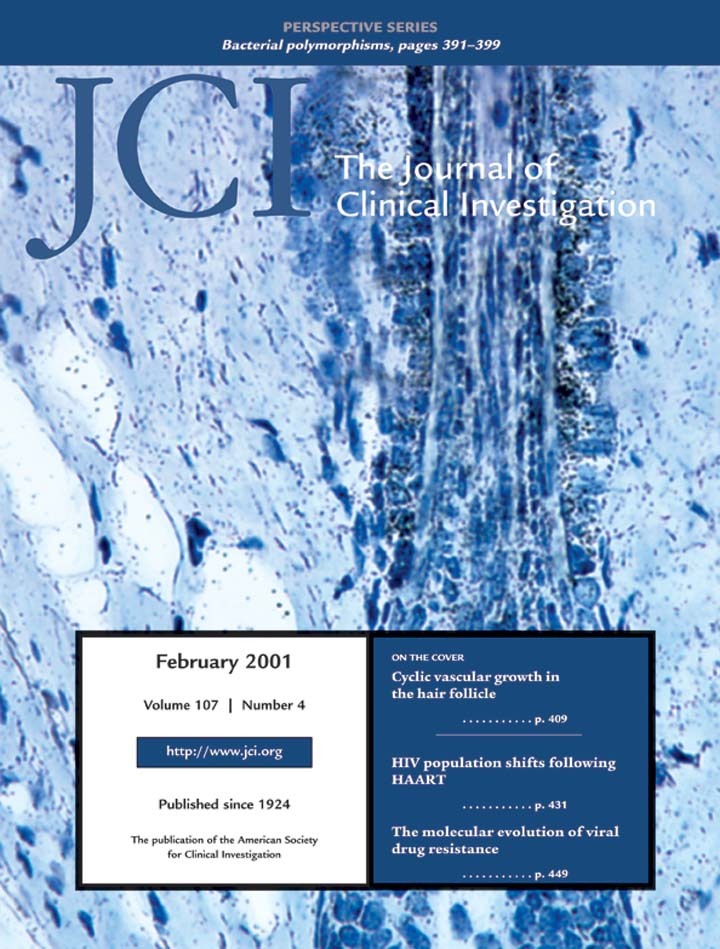 The murine hair follicle undergoes pronounced cyclic expansion and regression, leading to rapidly changing demands for its vascular support. Our study aimed to quantify the cyclic changes of perifollicular vascularization and to characterize the biological role of VEGF for hair growth, angiogenesis, and follicle cycling. We found a significant increase in perifollicular vascularization during the growth phase (anagen) of the hair cycle, followed by regression of angiogenic blood vessels during the involution (catagen) and the resting (telogen) phase. Perifollicular angiogenesis was temporally and spatially correlated with upregulation of VEGF mRNA expression by follicular keratinocytes of the outer root sheath, but not by dermal papilla cells. Transgenic overexpression of VEGF in outer root sheath keratinocytes of hair follicles strongly induced perifollicular vascularization, resulting in accelerated hair regrowth after depilation and in increased size of hair follicles and hair shafts. Conversely, systemic treatment with a neutralizing anti-VEGF antibody led to hair growth retardation and reduced hair follicle size. No effects of VEGF treatment or VEGF blockade were observed in mouse vibrissa organ cultures, which lack a functional vascular system. These results identify VEGF as a major mediator of hair follicle growth and cycling and provide the first direct evidence that improved follicle vascularization promotes hair growth and increases hair follicle and hair size.

To initiate infection, HIV-1 requires a primary receptor, CD4, and a secondary receptor, principally the chemokine receptor CCR5 or CXCR4. Coreceptor usage plays a critical role in HIV-1 disease progression. HIV-1 transmitted in vivo generally uses CCR5 (R5), but later CXCR4 (X4) strains may emerge; this shift heralds CD4+ cell depletion and clinical deterioration. We asked whether antiretroviral therapy can shift HIV-1 populations back to R5 viruses after X4 strains have emerged, in part because treatment has been successful in slowing disease progression without uniformly suppressing plasma viremia. We analyzed the coreceptor usage of serial primary isolates from 15 women with advanced disease who demonstrated X4 viruses. Coreceptor usage was determined by using a HOS-CD4+ cell system, biological and molecular cloning, and sequencing the envelope gene V3 region. By constructing a mathematical model to measure the proportion of virus in a specimen using each coreceptor, we demonstrated that the predominant viral population shifted from X4 at baseline to R5 strains after treatment. Multivariate analyses showed that the shift was independent of changes in plasma HIV-1 RNA level and CD4+ cell count. Hence, combination therapy may lead to a change in phenotypic character as well as in the quantity of HIV-1. Shifts in coreceptor usage may thereby contribute to the clinical efficacy of anti-HIV drugs.

Concanavalin A (Con A) causes severe TNF-α–mediated and IFN-γ–mediated liver injury in mice. In addition to their other functions, TNF-α and IFN-γ both induce the inducible nitric oxide (NO) synthase (iNOS). Using different models of liver injury, NO was found to either mediate or prevent liver damage. To further elucidate the relevance of NO for liver damage we investigated the role of iNOS-derived NO in the Con A model. We report that iNOS mRNA was induced in livers of Con A–treated mice within 2 hours, with iNOS protein becoming detectable in hepatocytes as well as in Kupffer cells within 4 hours. iNOS–/– mice were protected from liver damage after Con A treatment, as well as in another TNF-α–mediated model that is inducible by LPS in D-galactosamine–sensitized (GalN-sensitized) mice. iNOS-deficient mice were not protected after direct administration of recombinant TNF-α to GalN-treated mice. Accordingly, pretreatment of wild-type mice with a potent and specific inhibitor of iNOS significantly reduced transaminase release after Con A or GalN/LPS, but not after GalN/TNF-α treatment. Furthermore, the amount of plasma TNF-α and of intrahepatic TNF-α mRNA and protein was significantly reduced in iNOS–/– mice. Our results demonstrate that iNOS-derived NO regulates proinflammatory genes in vivo, thereby contributing to inflammatory liver injury in mice by stimulation of TNF-α production.

After receiving lamivudine for 3 years to treat chronic hepatitis B, 67–75% of patients develop B-domain L528M, C-domain M552I, or M552V mutations in the HBV polymerase that render hepatitis B virus (HBV) drug-resistant. The aim of this study was to evaluate the influence of these mutations on viral replication and resistance to antiviral agents. We investigated the replication fitness and susceptibility of the wild-type and five mutant HBVs (L528M, M552I, M552V, L528M/M552I, and L528M/M552V) to 11 compounds [lamivudine, adefovir, entecavir (BMS-200475) (+)-BCH-189 (±)-FTC (racivir) (–)-FTC (emtricitabine) (+)-FTC, L-D4FC, L-FMAU (clevudine), D-DAPD, and (–)-carbovir] by transfecting HBV DNA into hepatoma cells and monitoring viral products by Southern blotting. The replication competency of the single C-domain mutants M552I and M552V was markedly decreased compared with that of wild-type HBV. However, addition of the B-domain mutation L528M restored replication competence. Only adefovir and entecavir were effective against all five HBV mutants, and higher doses of these compounds were necessary to inhibit the double mutants compared with the single mutants. The B-domain mutation (L528M) of HBV polymerase not only restores the replication competence of C-domain mutants, but also increases resistance to nucleoside analogues.

Allergic bronchopulmonary aspergillosis (ABPA) is an allergic disorder caused by an opportunistic fungal pathogen, Aspergillus fumigatus (Afu). Lung surfactant proteins SP-A and SP-D can interact with the glycosylated antigens and allergens of Afu, inhibit specific IgE binding to these allergens, and block histamine release from sensitized basophils. We have now examined the therapeutic effect of exogenous administration of human SP-A, SP-D, and a recombinant fragment of SP-D (rSP-D), in a murine model of pulmonary hypersensitivity induced by Afu antigens and allergens, which resembles human ABPA immunologically. The ABPA mice exhibited high levels of Afu-specific IgG and IgE, blood eosinophilia, extensive infiltration of lymphocytes and eosinophils in the lung sections, and a Th2 cytokine response. Treatment with SP-A, SP-D, and rSP-D lowered blood eosinophilia, pulmonary infiltration, and specific Ab levels considerably, which persisted up to 4 days in the SP-A–treated ABPA mice, and up to 16 days in the SP-D– or rSP-D–treated ABPA mice. The levels of IL-2, IL-4, and IL-5 were decreased, while the level of IFN-γ was raised in the splenic supernatants of the treated mice, indicating a marked shift from Th2 to Th1 response. These results clearly implicate pulmonary SP-A and SP-D in the modulation of allergic reactions.

CD4 T-cell help is required during the generation and maintenance of effective antitumor CD8 T cell–mediated immunity. The goal of this study was to determine whether HER-2/neu–specific CD8 T-cell immunity could be elicited using HER-2/neu–derived MHC class II “helper” peptides, which contain encompassed HLA-A2–binding motifs. Nineteen HLA-A2 patients with HER-2/neu–overexpressing cancers received a vaccine preparation consisting of putative HER-2/neu helper peptides p369–384, p688–703, and p971–984. Contained within these sequences are the HLA-A2–binding motifs p369–377, p689–697, and p971–979. After vaccination, the mean peptide-specific T-cell precursor frequency to the HLA-A2 peptides increased in the majority of patients. In addition, the peptide-specific T cells were able to lyse tumors. The responses were long-lived and detectable for more than 1 year after the final vaccination in select patients. These results demonstrate that HER-2/neu MHC class II epitopes containing encompassed MHC class I epitopes are able to induce long-lasting HER-2–specific IFN-γ–producing CD8 T cells.

Isolated biotin-resistant 3-methylcrotonyl-CoA carboxylase (MCC) deficiency is an autosomal recessive disorder of leucine catabolism that appears to be the most frequent organic aciduria detected in tandem mass spectrometry–based neonatal screening programs. The phenotype is variable, ranging from neonatal onset with severe neurological involvement to asymptomatic adults. MCC is a heteromeric mitochondrial enzyme composed of biotin-containing α subunits and smaller β subunits. Here, we report cloning of MCCA and MCCB cDNAs and the organization of their structural genes. We show that a series of 14 MCC-deficient probands defines two complementation groups, CG1 and 2, resulting from mutations in MCCB and MCCA, respectively. We identify five MCCA and nine MCCB mutant alleles and show that missense mutations in each result in loss of function.

Rheumatoid arthritis (RA) is a chronic, inflammatory synovitis whose pathogenesis may involve autoimmune mechanisms. Anergy is a state of T-cell nonresponsiveness characterized by downregulated IL-2 production. Paradoxically, RA T cells are hyporesponsive and proliferate poorly to antigens and mitogens, thus sharing some characteristics with anergic T cells. We analyzed the molecular basis of anergy in cloned human CD4+ T cells using differential display RT-PCR and subsequently examined the levels of differentially expressed transcripts in RA and, as control, reactive arthritis (ReA) synovium. Several transcriptional events were common to anergic T cells and RA synovium. These included downregulation of Calmodulin, which is critical to T-cell activation, and of cellular apoptosis susceptibility protein, which may mediate resistance to apoptosis in RA. Transcription of Calmodulin in RA synovium was less than 1% of that in ReA and was lower in RA synovial fluid mononuclear cells than in paired PBMCs. Following anti–TNF-α therapy in vivo, RA PBMC Calmodulin transcripts increased five- to tenfold. Pharmacological calmodulin blockade in vitro impaired antigen-specific proliferation. These data provide a link between reduced Calmodulin transcription and impaired T-cell responsiveness in RA. The identification of transcriptional changes common to anergic and RA synovial T cells should help interpret some of the characteristic RA cellular defects.